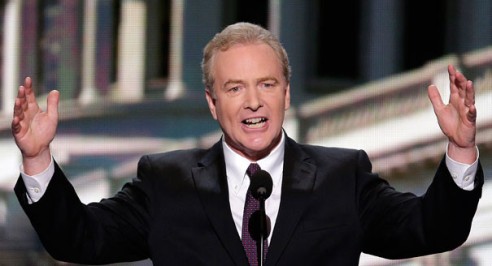 It’s becoming obvious that the closer we get to the 2020 election the more we can expect to see Democrats intensifying their effort to remove the one thing standing in their way to regaining the White House, that being President Donald Trump.  And as their desperation increases the more outlandish their baseless accusations of wrongdoing, on the part of the president, will become. And as there has been in the past, there will be no specifics of any kind attached to any of these accusations.

For example, on Monday’s broadcast of MSDNC’s “All In,” Senator Chris Van Hollen, Democrat, argued that “we know” President Trump has abused his power from the evidence produced by the House of Representatives.  Van Hollen said, “So, we know from the mountain of evidence from the House that the president abused the powers of his office, right? He withheld the critical military assistance from Ukraine to try to extract this personal political favor, interfere in our elections.”

A mountain of evidence?  Now granted, while I chose not to waste much of my time watching any of the ‘hearings’ that took place during the House impeachment inquisition, from what I read there was nothing presented in the way of any actual evidence that the president did anything wrong.  What we had was plenty of second, and even third, hand conversations regarding what someone was told by someone else who was told about what president had said during the phone call in question.

And keep in mind here, that these are the very same people who had, and continue to have, virtually no problem with any of Hitlery’s many questionable, and even illegal, shenanigans and who have chosen to simply ignore how we have ‘Crooked Joe’ Biden on videotape threatening the then president of Ukraine to fire the prosecutor investigating his coke-head-of–a-son’s company or risk losing $1 billion in aid.  All of that is perfectly fine and simply not worth the time it would take to investigate.

Meanwhile, there has been absolutely zero evidence of any kind that has thus far been produced or, for that matter, successfully fabricated that proves any actual wrongdoing on the part of President Trump.  These Democrats are like toddlers: “I know because I just know, and so it sucks to be you.” And make no mistake these individuals know that they are peddling nothing but lies and smears. Think of the type of person you must be to knowingly perpetrate such a thing. They are pond scum.

Am I the only one who sees it as being more than just a bit strange that Democrats, like this Van Hollen boob, think that they are somehow able to prove President Trump’s intent based on what has been nothing more than a continuous stream of hearsay testimony from indirect witnesses and yet we somehow couldn’t manage to prove Hitlery’s intent when she hid her private email server, destroyed numerous electronic devices, and deleted emails with classified material?  Seriously?

Democrats keep repeating this same nonsense over and over again in what is, I assume, the hope that more Americans will eventually come to believe it to be true.  But look, it was Barry ‘O’ who set the standard for presidential abuse of power in any number of ways!  There was ‘Fast and Furious,’ the IRS Scandal and Benghazi to name but a few. Not to mention all the spying he did on the Trump campaign.  And no one on the left, including this boob Van Hollen, seems to be the least bit concerned.

Now none of this is to say that along the way since, Donald Trump was sworn in as president, that there have not been numerous examples of abuse of power, just not by President Trump.  And we all know the names of the guilty parties.  Names like Pelosi, Schiff, Nadler, Comey, Brennan, Hitlery and Biden.  But lest we forget, there were those with names like Lerner, Rice, Holder, and of course the Ring Master of the entire little circus and the one responsible for allowing Americans to die, Barry ‘O’.

The moron, Van Hollen, claims to have the pulse of the American people to point where he fantasizes that we actually want higher taxes, millions of illegals flooding into our country driving wages down and crime up, we support the demonization of our police, and the dumbing down of our children by ‘teaching’ them political correctness instead of the three R’s and we support infanticide.  In other words those things that the Democrats wish to use in their ongoing effort to destroy America.

And just because Democrats claim to have evidence that doesn’t appear to actually exist, we’re supposed to side with them and against the president?  Sorry Homey, but that ain’t gonna happen.  Barry’s entire regime was based on abuse of power as evidenced by an endless chain of scandals.  And then there’s ‘Crooked Joe’s’ abuse of power as vice president?  Why is he even still running?  Why was ‘Crooked Hitlery’ allowed to keep running?  Corruption, it seems, is a resume enhancer for Democrats.

As far as I’m concerned it’s as long as Democrats, like this Van Hollen guy, continue with their attempts to remove President Trump, the more I know he is doing what it is I elected him to do.  They will just keep lying and claiming they have proof that they don’t have nor have EVER had. They stay on the offense because they are guilty and have no choice. If there were more real conservatives in Congress instead of just bunch of spineless wimps this silly impeachment inquisition would have been ended.

These Democrats are radical leftwing frauds, demagogues and pathological liars. Their credibility on the topic of impeachment is zero. Their knowledge of the Constitution and our history is non-existent.  ‘Abuse of power’ is an undefined, vague and a catch-all phrase which simply means that the Democrats disagree with the President. The framers specifically rejected any such bases as grounds for impeachment.  Van Hollen, and those like him have no business being in the position they are now in.

Democrats know they’ve got nothing on the president.  If they did they would have wasted precious little time in getting their ‘articles of impeachment’ over to the Senate, doing so so fast it would have made their little pinheads spin.  Together these Democrats form what is truly nothing more than a disgusting little troop of degenerate, debauched, and rather deluded liars.  But then, we shouldn’t be at all surprised since, after all, this type has been lying for what has been centuries.