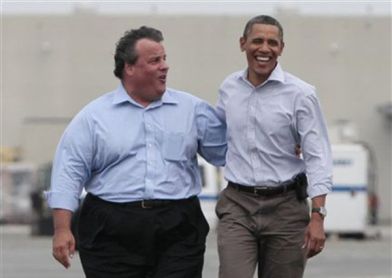 Well Chris Christie has finally made official what many of us had known, or had long suspected, was coming.  And that would be that he has now declared himself to be a candidate for president in 2016.  And while all of his rhetoric sounded pretty good, it was really all nothing more than we’ve all heard may times before, by many others only to hear the tune change, and rather drastically, once the office sought has been safely secured.  Where I once was a fan of Mr. Christie, I am no longer.  I’ve moved on, so to speak, to those who do more than simply call themselves a conservative.

And so it was just yesterday that those choosing to tune in got to watch Christie as he returned to his alma mater to formally announce his 2016 presidential bid, embracing his blunt-talking persona as he strives to stand out from what has now become a rather crowded GOP field.  It was from the podium there at Livingston High School, standing with his wife and children that, in sounding rather reminiscent of Barry’s declaration that it was he who we had been waiting for, Christie said, “I mean what I say and I say what I mean, and that’s what America needs right now.”

At times, Christie, who delivered his remarks while standing in front of a large American flag and without a teleprompter, sharply criticized both Republicans and Democrats alike.  He said, “Both parties have failed our country,” he said, declaring he is “out to change the world.”  He went on to say, “We need to have strength and decision-making and authority back in the Oval Office.”  And then he added, “And that is why today I am proud to announce my candidacy for the Republican nomination for president of the United States of America.”

Christie spent much of his 20-minute speech reintroducing himself to a national audience that’s seen him fade from favor among the GOP faithful, yours truly included.  Days earlier, he launched a website under the campaign slogan, “Telling It Like It Is.”  Christie slammed the persistent bickering in Washington, saying, “compromise is now a dirty word,” and also took aim at Barry “Almighty’s” disastrous foreign policy record.  He said Barry’s “second mate, Hillary Clinton” should not be allowed to take charge after years of “weak and feckless foreign policy.”

Once considered an early front-runner, Christie and his camp hope to rebuild momentum as the race for the White House gets under way. The “Bridgegate” scandal set his national profile back, but his team is still looking for an opening among a diverse cast of GOP primary candidates.  Christie is one of four current governors in the mix on the GOP side.  He joins Louisiana’s Bobby Jindal, who announced his candidacy last week, as well as expected candidates Wisconsin Gov. Scott Walker and Ohio Gov. John Kasich.  Their announcements are expected in July.

Christie said Americans are filled with anxiety because “they look to Washington, D.C., and they see not only a government that doesn’t work anymore, it doesn’t even talk to each other anymore.  It doesn’t even pretend to work anymore.  We have a president in the Oval Office who ignores Congress, and a Congress who ignores the president.”  But Christie strikes me as being too much like those whom we now have in Congress on the GOP side who have been far too accommodating, especially since taking control of Congress, giving him much if what he has wanted.

More recently, though, Christie has dealt with a lengthy criminal investigation over his staff’s involvement in a politically motivated bridge closure.  Christie has maintained he was not involved in the matter.  Now look, let me be very clear about something, my opinion of Christie as a candidate notwithstanding.  This supposed scandal involving the closing of some bridge pales in comparison when held against what has become nothing short of a laundry list of scandals that surround not only this president but also the number one Democrat presidential contender for 2016.

Let me be right up front here regarding the reason why I feel the way I do about Mr. Christie and his decision to run for president.  While I am not usually one of those folks who typically holds a grudge, it’s in the case of Mr. Christie that I’m willing to make an exception.  Because to this day I feel that he deserted Mitt Romney at what was a very critical time on the 2012 campaign and when you combine that with what appeared to be a real bro-mance between him and Barry as recently as 2013, there is simply no way in Hell that I can ever see myself voting for him for president.

At this point in time, and I honestly don’t see myself changing my mind about him.  There are others in this current group of 14 whom I view as being far more conservative and far more trustworthy.  As far as I’m concerned out of the current batch its Christie, Bush, Rubio, Pataki and Graham who can be immediately discounted.  Nor am I fan of John Kasich who is apparently getting ready to throw his hat into the rapidly expanding ring.  And to be honest, despite some of his recent comments, I’m not a fan of Mike Huckabee.  We need to be very selective this time.