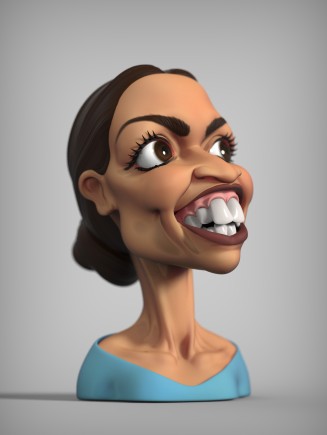 I will freely admit here and now that I am by no means anywhere near an expert on our Constitution.  But having said that, I do think it fair to say that I know a good deal more about it than do a rather significant number of those who are supposed to be our elected ‘leaders.’  And I will also go so as far as to say that I know more about it than does every Democrat now serving in Congress.  Because it is they who seem to be able to find buried within our Constitution all manner of supposed ‘rights’ that, no matter how hard I might try, I am simply unable to locate anywhere.

For instance, it was Alexandria Occasional-Cortez who made the rather bizarre claim, as recently as this past Tuesday, that the U.S. cannot call itself an “advanced society” until it guarantees the right to housing, health care, and education, adding that the state of housing in the U.S. is “barbarism.”  She decried the state of housing in the U.S. and blasted the “totally inhumane” conditions of public housing.  And she called for “a complete overhaul of our housing policy and our housing system in the United States of America” on the grounds that housing is a “human right.”

And, she said, “It is time that we stop commodifying the housing market because it is not a speculative investment.  It is a basic right for all Americans.”  She said, “It’s beyond time that we stop using our housing market as a place for the rich to launder their money, and for the global one percent to launder their funds when people are sleeping on the streets, when there are hundreds and thousands of empty apartments with the lights out all the time in cities across America.”  I swear, every time she opens her mouth it becomes all the more clear just how truly ignorant she is.

“Housing – along with free health care and free education – must be implemented, otherwise, the U.S. cannot call itself an “advanced society,” so declared Occasional-Cortez.  And she stated, “But until we do not guarantee the right to housing, until we do not guarantee health care and education, we cannot call ourselves an advanced society.”  She continued her rant saying, “It’s a basic right along with education and health care.”  And she added, “Once we get these basics covered, then our country can earn the right to call ourselves an advanced society.”

And she said, “What we are experiencing right now in housing in the United States is barbarism. It’s Barbarism. It is backwards. It is holding us back until we fix it.”  And apparently her plan for addressing the issue includes providing those facing eviction “guaranteed access” to counsel “so that every person has a lawyer before a person tries to kick them out.”  So everyone facing eviction gets a lawyer?  Does she realize that the landlord still has to pay the mortgage, insurance, taxes and maintenance on the property even when they get stiffed on the rent?  Doubtful!

What is truly “barbaric,” Ms. Occasional-Cortez, is allowing people like yourself, who have absolutely no awareness, let alone any understanding, of the laws of the United States, to hold positions of power as members of Congress.  Her utter stupidity has been evident since the day she announced her candidacy. At every point she has opened her mouth, she has reaffirmed my first impression of her that she is an utter disgrace and a fool.  It is not the government that grants the rights to life, liberty, and the pursuit of happiness, Ms. Occasional-Cortez. It is the Creator himself.

Now, people may argue as to the nature of that higher power, but those that founded the country held that belief because it provided a moral force to counter the tyranny of a dictatorial monarch.  Now, with regard to her issue with housing.  It already is the policy of the United States government to enable people to buy their own homes. The United States already has public housing projects.  One would think that the 2008 recession and the repeated failure of public housing projects would illustrate the absurdness of her request.  But apparently that is not the case.

And it is every time she opens her she makes it more than a little clear that she has never read the Constitution, much less the Bill of Rights. We have all manner of ‘entitlement’ programs that cover housing, food, and medical care.  The “poor” of our country have cell phones, big screen TV’s and free medical care. We have built low income housing for our poor only to watch the residents tear them apart and set up gangland poor areas and I have seen houses where there are 3-4 generations of baby mommas with 6 kids running around and no baby daddy in sight.

The left in this country has destroyed the family, outlawed fathers and kicked God out of everywhere that it possibly can.  Then, when their “program” fails, they scream that the solution is yet another, even more costly, “program”.  After all self-sufficient people can be notoriously unruly. Impoverish them and they tend to be much easier to control.  And yet there is nothing about any of that that Ms. Occasional-Cortez apparently sees as being “inhumane?”  So obviously how the Democrat’s define humane differs greatly from how the rest of us do.