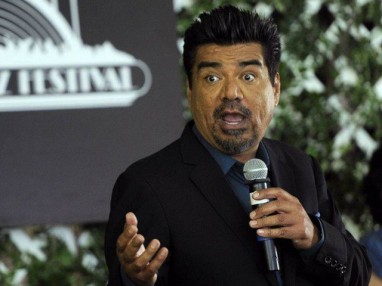 I have never quite been able to figure out how it is that those who so proudly wear the moniker of ‘Liberal’ can come to so vehemently hate this country and all that it stands for.  What makes someone applaud efforts to tear down, eradicate, or simply have declared as being illegal the very institutions which form the very foundation of this once great and proud nation.  They have no problem with condoning all manner of bad behavior, no matter how illegal, or perverted it may be, and then accuse those of us who choose not to, of being intolerant.

For instance, it was earlier this week during an interview that comedian, and I use the term very loosely because I’ve seen this guy’s act and he’s anything but funny, George Lopez described Donald Trump’s comments on illegal immigration as “vile”.  But I’m thinking that more than likely the reason Lopez didn’t like what Trump said had far more to do with the fact that it was a white guy who said it than with what was actually said.  Because Lopez has been saying derogatory things about Hispanics for years as part of idiotic standup routine.

And now come reports that NBC’s top brass are said to be looking for a minority to replace Trump on the popular reality television show ‘Celebrity Apprentice’, a decision that was apparently made after Trump’s comments during his campaign announcement which ignited what has now become a media firestorm.  But let’s face it, as a candidate Trump wasn’t going to be able to do the show anyway.  And who is better than Trump at being Trump?  That would be ‘No One.’  And if it’s Lopez that’s being considered as a replacement, lots of luck!

It was during the aforementioned interview done with ‘TMZ’ that Lopez said, “Listen, those (Trump’s) comments are vile in any civilized society, but there’s a freedom of speech.”  And he went on to say, “I know him, I don’t particularly like what he’s saying, but there is a right to say that.”  Well at least he got that part right, but I’m sure it was nothing more than a slip of the tongue.  Because usually freedom of speech is the first to go whenever one is taking on one for the issues most favored by those on the left.  You must agree or be called a bigot.

Lopez said that he plans on boycotting Trump’s golf course, though he conceded that it probably won’t affect Trump’s bottom line.  Ya, I bet that’ll bring a tear to ‘The Donald’s’ one good eye.  NOT!  Lopez also went on to say that he thinks Trump could get elected, and predicted what Latinos might do if that were to actually happen, and that would be for all them to just leave.  Sorry George, but I’m just not seeing a down side to that, and somehow I think this country could go on.  So in other words, don’t let the door hit you in the ass on the way out.

“Yeah, sure, [he has a chance],” Lopez told TMZ. “There’s enough racists in this country for him to get elected.”  Lopez jokingly ended the brief interview saying, “Trump in 2016.”  He added, “If he wins, he won’t have to worry about immigration, we’ll all go back.”  We should be so lucky!  But where else does Lopez think he could go and make the amount of money that he makes in America.  And yet he so disrespects this country.  And let’s be honest here, it doesn’t take much brainpower to be a standup comic.  Lopez proves that point every time he opens his mouth.

Liberals like Lopez see absolutely nothing wrong with allowing those who are in this country illegally to ignore our laws.  And they also seem not to be bothered in the least when these individuals, again who are in this country illegally, murder and rape Americans.  Perhaps if it had been this moron’s daughter who had recently been murdered by an illegal scum his opinion might be different.  Although I seriously doubt it.  Liberals just don’t look at things the way normal people do.  We are supposed to be nation of laws, but liberals don’t see it that way.

And so it would seem that those on the left, those who agree with Mr. Lopez, are winning, or may even have already won, the battle for the soul of America.  And I think we can also all safely come to agree on the fact that it has been the presidency of one Barack Hussein Obama that has provided much assistance in that endeavor. And, again, all too sadly at the expense of the rule of law.  And it has been those on the left who view such a consequence as being insignificant and as a necessary, even integral, part of the entire ‘transformation’ process.