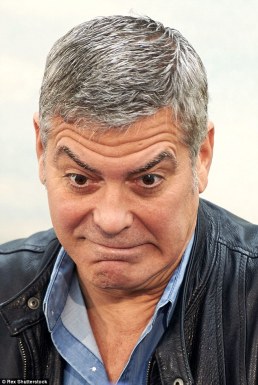 Taking time out from doing that which he does best, making movies that suck and typically bomb at the box office, Hollywood elitist George Clooney recently left no doubt about just how offended he is that Donald Trump is now our president.  And he, apparently, now considers Trump as part of the same Hollywood elite that Trump condemns.  So in what was an attempt to throw some dirt on Trump, old ‘Looney’ Clooney has conjured an unoriginal idea and is now calling Trump, a Hollywood elitist.

‘Looney’s’ comment came during an interview in France where he was to receive an honorary award, since that’s the ONLY kind of an award he is able to ‘receive’ because his movies suck, at what amounts to the French Oscars.  Most folks know that Clooney was very pro-Hitlery and will likely remember, too, how it was that he claimed, “there will never be a President Trump.”  He said it’s very hypocritical for Trump to speak about the ‘Hollywood elite’ in the manner in which he does.

‘Looney’ Clooney said, “There’s a really interesting argument, this is the part that makes you a little crazy. When Meryl [Streep] spoke [at the Golden Globes], everyone on that one side was, ‘Well that’s elitist Hollywood speaking.’ Donald Trump has 22 acting credits in television… He collects $120,000 a year in his Screen Actors Guild pension fund. Uhh? He is a Hollywood elitist.  I would argue that the ‘Hollywood elite.”  But it’s not the number of ones credits that makes one an elitist.

But still ‘Looney’ went on, claiming that at least Trump was relatively successful in the industry, unlike his chief strategist, Steve Bannon, who ‘Looney’ Clooney called a ‘failed film writer and director’.  Which I thought was a big ironic, because I can’t help but wonder how much of a ‘success’ Clooney would have become if it weren’t for the fact that he owns the production company that continues to make his pathetically bad movies. It’s my guess he would have long ago been considered as box office poison.

And yet Clooney said, “Steve Bannon is a failed film writer and director.”  And he went on to say, “That’s the truth, that’s what he’s done. He wrote a Shakespearean rap musical about the L.A. riots that he couldn’t get made. He made a lot of money off of Seinfeld. He’s elitist Hollywood, I mean that’s the reality.”  Look, it’s Clooney’s job, as it is everyone else’s in Hollyweird, not to deal in reality, and it’s he’s and his many friends who are doing a pretty good job of that off-screen, as well as on.

But, look, this is just the latest example of Clooney speaking out against Trump.  You see, it was back on February 22 in an interview with The Daily Beast that ‘Looney’ Clooney made the same claim that Trump is a ‘Hollywood elitist’ due to his numerous TV and film credits.  It was then that he said, ‘Donald Trump has 22 acting credits in television… He collects $120,000 a year in his Screen Actors Guild pension fund. Uhh? He is a Hollywood elitist.’   Most folks, I think, likely use a different criteria.

Anyway, it was Paris Mayor Anne Hidalgo and France’s foreign minister who also pushed back at Trump for insulting the ‘City of Light’ on Friday in a speech.  You see, it was in an address at the Conservative Political Action Conference (CPAC) that Trump evoked his friend Jim, who we were told is ‘a very, very substantial guy.’  Trump said that Jim used to be a regular visitor to Paris, but that he hasn’t made the trip in four or five years because ‘Paris is no longer Paris’.

President Trump, in what was an apparent reference to last year’s Bastille Day attack in Nice and the 2015 Paris attacks, said, “Take a look at what’s happened in France. Take a look at Nice and Paris.”  He said Jim used to visit Paris each summer, “It was automatic… He wouldn’t miss it for anything.”  Trump said, “Now he doesn’t even think in terms of going there. Take a look at what’s happening to our world folks and we have to be smart. We have to be smart. We can’t let it happen to us.”

I sometimes wonder if Clooney ever feels the least bit foolish after his rather silly little prediction about how Trump would NEVER become President.  Especially now when now called on to say something because Trump IS President.  Somehow I doubt it, because it remains quite clear that ‘Looney’ Clooney is, just as he was then, simply not mentally prepared to address this situation.  Like so many of those in Hollyweird he is simply so out of touch with those who still comprise a majority of Americans.

Americans view Hollyweird as being one of the most rapacious, unpleasant, backstabbing, money obsessed industries there is on the entire planet. Their product is rarely of any worth, and is clearly focused on wringing as much money as possible out of the masses.  How can people who’ve done spectacularly well out of such a soulless uber-neoliberal ultra-capitalist industry possibly think they have the right to lecture us about what our money should be spent on.  And yet, they do.