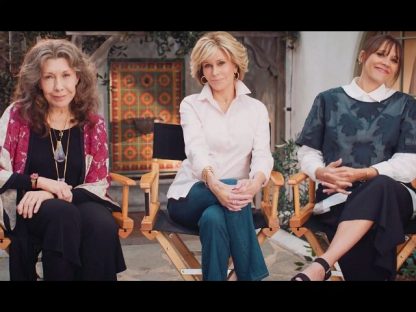 Those on the left have now embarked on what’s being called a ‘voter drive’ which is left-wing slang for combing cemeteries, morgues or anywhere else where those who ‘vote’ Democrat can be found.  And it’s ‘Hanoi Jane’ Fonda, Rashida Jones, and Lily Tomlin who, possessing a combined IQ equal to that of a pencil eraser, have joined forces in offering both support and encouragement to those taking part in what may be little more an attempt to effect the outcome of this November’s elections.

We’re told that roughly two dozen left-wing ‘activist’ groups, including Indivisible, MoveOn, Latino Victory, the Democratic Attorneys General Association and Organizing for Action, are behind a voter turnout ‘coalition’ referred to as ‘The Last Weekend.’  This left-leaning coalition aims to create a volunteer force consisting of what is likely little more than an army of brainwashed snowflakes who will then dedicate over one million hours to driving out voters in November’s midterm elections.

And it’s in what’s being described as a promotional video that we see Jones alongside ‘Hanoi Jane’ and Tomlin, both of whom star in some Netflix series, Grace and Frankie, and it was Jones who said, “Don’t just vote this year. Volunteer.”  And she goes on to say, “Voter turnout during the midterms is historically terrible, with nearly half the voters compared with presidential elections.”  And then ‘Hanoi Jane’ pipes up saying, “Do you care about gun control?  Women’s health?  Income inequality?”

One of this coalition’s organizers, some left-wing kook by the name of Ethan Todras-Whitehill, described the push as being the “next step in the resistance” as America’s anti-Trump activists step up their campaigning against his administration.  He said, “In an election this consequential, it’s just not enough to vote this year.”  And he added, “For all the people who are upset about Donald Trump and what the Republicans are doing, voting is essential, it’s necessary, but it’s not sufficient.”

The coalition is currently asking people to volunteer online with the following plea:

“We’ve marched. We’ve rallied. Now we’re ready to give it everything we’ve got, on the last weekend before the midterm elections.  Study after study shows that the most effective way to get people to vote is by having conversations with them in the four days before Election Day (Saturday, November 3rd–Tuesday, November 6th). Each of us has the power to make a big difference in a key race by talking to voters. Don’t just vote this year—volunteer! Will you be there when it matters?”

The left has now become consumed with hate and their effort to turn back the clock and attempt to make it as if the 2016 election never happened.  And it is those of us on the right who must now be just as determined to make sure that they are not successful in their endeavor.  And far from letting our frustration assume control of our actions, we must be methodical and thorough as we expend every effort and seize every opportunity to make sure that the Republicans remain in control of Congress.

Those on the left now appear more like cornered animals, they view both the president and his supporters as the most serious of threats to their blatantly perverted view of what this country should be.  And as we all know, it’s a cornered animal that is always the most dangerous.  And in watching any of those on the left it’s gotten a little scary to see what it is that they have become.  Any semblance of rational behavior is now nowhere to be seen.  They have become totally deranged!

And as is always the case whenever dealing with anyone on the left, we need to understand that for them it’s about the ends ALWAYS justifying the means.  Let’s be real here, they care little about the integrity of our election process and see it only as an opportunity, as something to be manipulated in order to bring about the their desired result for no other reason than because they see it as being one of the only ways of being able to advance their highly destructive anti-America agenda.

And as crazy as it sounds, RealClearPolitics generic congressional polling still has the Democrats with a 7.7 point lead over their Republican counterparts going into the midterms.  Something that continues to keep hope alive, among those on the left, that the much talked about “blue wave” will actually become a reality for them in the November elections.  Crazy because no matter how hard I try to rationalize how any sane person can willingly vote for ANY Democrat, I keep coming up empty. 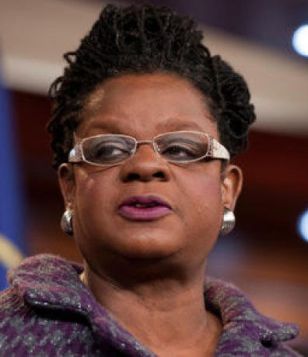 Ok, so can someone please explain to me what it is with politicians from Wisconsin?  And it would seem it’s regardless of party affiliation.  I mean first, on the Republican/RINO side, we have Paul Ryan who is doing his damnedest to convince folks that what’s really nothing more than an experiment in semantics is actually a bona fide attempt at “repealing and replacing” Obamacare.  And secondly, it’s over on the Democrat side that we now have Gwen Moore who seems to be busying herself these days by advocating against a wall along our southern border and claiming Americans should not have to pay for it.  They’re both nuts!

And it was Ms. Moore, as if doing her best to prove the point that Shelia Jackson Lee, Barbara Lee, Marcia Fudge and Frederica Wilson aren’t the ONLY ignorant black women in Congress, who said during a recent interview on the Communist Broadcasting System (CBS) that, “I am not in favor of the wall, but if there is a wall, then I do not want the United States of America to pay for the wall.”  And it was according to CBS that she was slated to introduce a jim-dandy piece of legislation on Thursday of this week the purpose of which would be to block funding for a border wall, which was one of President Donald Trump’s key campaign promises.

Her pathetic little piece of legislation, which she has so cleverly entitled the “No Taxpayer Funding for the Wall Act,” would, if signed into law, prohibit any federal funding, including funding that has already been appropriated, from going toward wall construction.   And the bill also would block states from using federal funding to build the wall and require the Trump administration to enter into a Senate-approved treaty requiring another country to foot the wall bill.  Moore’s measure would also mandate audits of the project and levy penalties on entities that violate its terms.  This sounds as nutty as Ryan’s bill to “repeal and replace” Obamacare.

And what should come as a surprise to absolutely no one is the fact that so far that she has managed to get “more than three-dozen” of her fellow Democrats to sign on as co-sponsors to her silly little bill.  But Moore has said that she is also very eager to recruit fiscal conservatives and Republicans wary of Trump’s plans for her effort.   She told CBS, “My bill gives amazing opportunities, I think, to people like [Ohio Republican Rep.] Jim Jordan to opt out of building the wall.”  And then went on to say, “I’m trying to mobilize some interest in my bill from deficit hawks.”  Deficit hawks?  So it’s now that this moron becomes concerned about the deficit?

So anyway, I’m only assuming that Ms. Moore, as well as the three-dozen, or so, of her fellow Democrats who have signed on with her, are either too ignorant to understand, simply couldn’t care less, or simply chooses to ignore the fact that it’s poor American blacks who tend to end up paying the highest price for these Illegal immigrants.  Democrats, like Ms. Moore, profess to be the defender of the little people and of minorities and yet rarely do they ever pay attention to blacks except around election time.  And these Democrats aren’t moving these illegals into their own neighborhoods, but instead are dumping them off.

As more and more of those here illegally choose to leave the US voluntarily, and as President Trump sees to it that more are deported, as he’s currently doing with the criminal illegals, there will be less to provide the benefits for.  Some are leaving and heading to Canada, where they’re now seeking asylum from Canada.  I’m keeping my fingers crossed that many more do the same.  Also there’s more headed back home to Mexico since President Trump won the election, and our border agents tell us those seeking to immigrate to our nation has slowed by approximately 40-50%.  That’s a great beginning from what was going on during the tenure of Barry “Almighty”.

Because where Barry was forcing our ICE/Border agents to violate the oaths they took to secure and protect our borders from what was nothing less than an invasion that consisted of those not just from Mexico, but people from all over Central America, the Caribbean and even the Middle East, those who Barry called ‘refugees’, President Trump is now allowing them to do their job and is even encouraging them to do so.  In fact he intends to increase their numbers. [There was at one point a video of some ICE/border agents testifying before Congress about how Barry “Almighty” was forcing them to violate their oaths. That video has since been taken down.  Hmmm.]

There are at least 900,000 individuals in this country illegally who are at the top of the list of those who have been identified for deportation.  And were it not for the protection from deportation they received from Barry they would have long ago been sent back to where they came from.  And it’s many of these individual who have been provided refuge, against American law, in the hundreds of ‘sanctuary cities’ spread all across the country.  Despite having been ordered to leave they didn’t, and no one seemed to care.  President first priority will be to deport these criminal illegals and once they have been deported, the next priority will be to address the rest of those here illegally.

So why is it that Democrats, like Ms. Moore, have no problem with allowing the invading our county that takes place every day and, potentially, from all parts of the world to continue?  They seem to mind not at all that criminal illegal aliens are living here and are roaming our streets killing innocent legal United States citizens who depend on their government to protect them.  And our ‘fake news’ media refuses to identify and report these illegal alien crimes that are happening daily!  They are in lock step with a Democrat Party that is favor of open borders and total lawlessness all in an effort to gain new Democrat voters!  Because that’s what this is really all about.