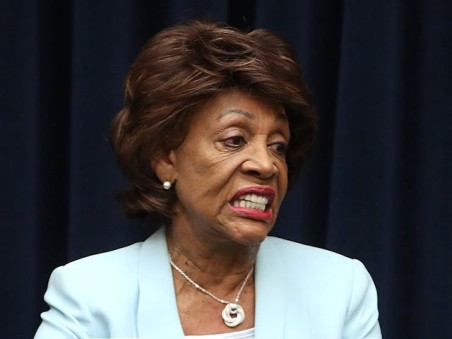 As time marches on I’m becoming increasingly worried about how much longer my country will be able to survive.  I mean when you have the entire Democrat Party and, sadly, a good share of the Republican Party, now being nothing short of completely derelict when it comes to their duty of safeguarding our country, how much longer is it that we can expect to remain a free and sovereign nation?  And what does it say about our supposed leaders when our president is portrayed, by both sides, as being nothing less than the most evil and corrupt man in all of human history?  I mean where were these very same people during the eight years of the Obama presidency?

And so it was ‘Mad Maxine’ Waters, that Democrat from Commiefornia, who this past Tuesday, during an appearance on MSDNC, said that not enough Americans are resisting and speaking out against President Trump.  Well why in God’s name would anyone who genuinely loves this country ever want to do something like that?  It shows you just how thoroughly demented the leaders of the Democrat Party have become.  It was the election of Donald Trump that has brought about what is a collective nervous breakdown on the left, they have been totally mad, revealing their true selves as they pull out all the stops in their effort to remove President Trump.

‘Mad Maxine’ said, “The American people should be focused on Barr. We should be joining with all of those federal prosecuting attorneys that have decided he should step down, that he should resign. We should be supporting them and backing them up. I’m anxious to see what the federal judges who have decided they can’t wait until the yearly association meeting, that they should pay attention to what is going on now and review what has happened. I’m anxious to see what they’re going to come out with.”  Personally I am focused on Mr. Barr, for what is his apparent reluctance to go after those with names like Brennan, Clapper, Comey and, yes, even Clinton.

Anyway, ‘Mad Maxine’ continued, “But the American public should get behind this if they care anything about our democracy. You know, for all of those people who say that they, you know, honor the flag and that they are in support of our democracy being strengthened, for all of those people who say that—where are you?  Can’t they see what is happening? We’re in a constitutional crisis in this country, with a president who is running amok. He is out of control. We have got to make sure that he’s not reelected. We have to speak up, we have to resist. I don’t hear enough voices.”  But the fault of any “constitutional crisis” rests solely with the Democrats!

She said, “It is not only the sycophants around him, it’s the average American who gets up every day, who is taking care of their families, who is thinking somebody else will see to it that this president is not re-elected. But, no, it has to be all of us out there working and working very hard. We have a constitutional crisis and we’ve got to deal with it. This is what democracy is all about, when you see a president out of control, when you see those who have been elected to office, who are not acting responsibly and they’re endangering our democracy, you have to speak out against them. You have got to make sure that they’re not reelected ever again.”

What this truly pathetic old dingbat fails to mention, of course, is the fact that those federal ‘prosecuting attorneys’ who have now somehow come to the conclusion that Mr. Barr needs to step down, or that he should resign, are all, for the most part, rabid left wingers.  And the fact that they are now all screaming that he needs to go has absolutely nothing whatsoever to do with how he is doing his job, what it has everything to do with is the fact that he works for President Trump.  I would imagine that their primary concern is one that has them worried that Mr. Barr might actually start doing his job as those of us who support this president think that he should.

And I guess I’m going to need to be the one to inform this imbecilic old hag that it’s millions of average Americans get up every day and go to work so that they can take care of, and provide for, their families who are desperate to see President Trump re-elected and who continue to oppose those like ‘Mad Maxie’ who are so desperate in their effort to make sure that that doesn’t happen.  They don’t see a president that’s out of control, what they see is a president who is doing all that he can in an effort to keep those promises that got him elected in the first place, in spite of the concerted efforts by the Democrats, and some RINOs, to prevent him from doing so.

So the state of our “democracy” is just fine Maxine! The people voted, in accordance with our Constitution, for Donald Trump to be their President.  And the people will have the opportunity to choose again in November 2020. What Democrats fear is that they have virtually no way to counter the policies of President Trump that are so very clearly working while their prescriptions for what ails the country have been unmitigated disasters.  Why would the people want to resist a great economy, good jobs, more freedom and greater security?  It’s every day that we are hearing and watching Democrats, like ‘Mad Maxine’ disparage our nation and our Constitution.

And why is it that ‘Mad Maxine’ MIGHT think more Americans are not getting onboard the impeachment bandwagon and seem so resistant about doing so?  I mean you would think that such things as a record setting economy, record setting job numbers, record setting stock market, record unemployment for blacks, Hispanics and women, huge tax cuts, much higher retirement savings and manufacturing expanding with more companies bringing jobs back to America would be more than sufficient to have people taking to the streets demanding that the Democrats continue to do all that they can to see that President Trump is finally removed from office.  But nope!

Oh, and then of course there’s that Gallup poll released just last week that seemed to show double digit increases in race relations including black business startup’s skyrocketing to a whopping 400% increase, opportunities abound and America’s poor are taking advantage and individual satisfaction with their lives is up a whopping 40%, President Trump has also added trillions of dollars of wealth back into America’s economy and the man donates his entire paycheck every year to help Veterans.  Isn’t that all reason enough to be calling for the impeachment of Donald Trump?  So how stupid does ‘Mad Maxine’ and her cohorts in the Democrat Party think we really are?

But not to worry, Mad Maxine’, rest assured that we will all go out of our way to make sure that we show up on Election Day and I can guarantee that it will be at that time all of our voices will be heard loud and very clear.  We can’t congregate together or proudly display our flag without being called racist or white supremacists.  We can’t even wear a red hat or show support for our President without being physically attacked.  But make no mistake we are all still here and waiting ever so patiently for Election Day.  And it’s then that you will hear us, and when the dust settles it will again be you and your friends who will be in tears while the rest of us are cheering.