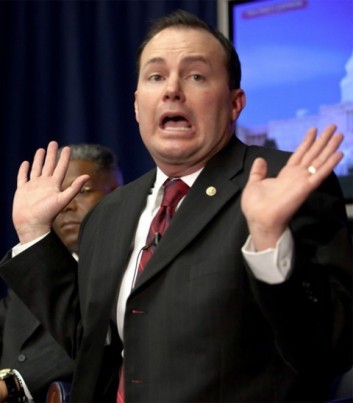 I’ve long been disappointed in Mike Lee, the senior Senator from Utah.  He’s always tried to sell himself as being a true Tea Party type and a stalwart conservative.  And back in the beginning, in 2011 when he first assumed his current office, that may very well have been the case.  Bust as so often happens, it would appear that the longer he’s been in office, the more he appears to be out to serve himself and not those who elected him.  Perhaps he’s been hanging out a bit too much with his fellow senator from Utah, Mitt Romney.  Whatever the reason for his continuing slid leftward, he has made it very clear that his interests lie not in “Making America Great Again!”

And he recently again made that very clear, when earlier this week he took the opportunity to again make us wonder just whose side it is that he’s really on.  It was on Wednesday, during his remarks carried by CSPAN, when he reacted to the Trump administration’s briefing to lawmakers regarding the airstrike that killed terrorist mastermind Qasem Soleimani.  And in so doing Lee used some rather disparaging language.  Lee complained, “The briefing lasted only 75 minutes whereupon the briefers left.”  Ok, so how long did he think it should have lasted?  I mean, he’s a pretty bright guy, right?  What was it that he thought might have been missing?

Anyway, it was from there that Lee went on to say, “This is not the biggest problem I have with the briefing, which I would add was probably the worst briefing I have seen at least on a military issue in the nine years I have served in the United States Senate. What I found so distressing about that briefing was that one of the messages we received from the briefers was do not debate, do not discuss the issue of the appropriateness of further military intervention against Iran. And that if you do, you’ll be emboldening Iran.”  I guess I’m just not seeing what it is that has his panties in such a bunch.  Is he yet another who seems to have forgotten why he is where he is?

Lee said, “The implication being that we would somehow be making America less safe by having a debate or a discussion about the appropriateness of further military involvement against the government of Iran.”  And he went on to say, “I find it insulting and demeaning. Not personally, but to the office that each of the 100 senators in this building happens to hold. I find it insulting, and I find it demeaning to the Constitution of the United States to which we’ve all sworn an oath. It is, after all, the prerogative of the legislative branch to declare war. Article I, Section 8 makes that very clear.”  Another guy who bogusly claims allegiance to the Constitution?

He said, “Alexander Hamilton, in Federalist No. 69 made clear that this was a sharp contrast from the form of government that we had prior to the revolution. A form of government in which the executive, the king, had the power to take us to war. He did not need the parliament to weigh in on it, to support it.  It is not acceptable for officials within the Executive branch of government, I don’t care whether with the CIA, with the Department of Defense or otherwise, to come in and tell us we can’t debate and discuss the appropriateness of military intervention against Iran. It’s un-American. It’s unconstitutional, and it’s wrong.”  Lee takes himself too seriously!

I’m more than a little curious about where this sniveling, arrogant, weasel was when it was Barry ‘O’ who was using drones to take out supposed bad guys, one of whom, if I remember correctly, was an American?  And I still don‘t get why anybody would ever hold this guy up as being some sort of Conservative icon.  He has been, and for some time, a corporatist shill, always for bringing in more foreign workers and issuing more H1B visas while stabbing American workers in the back.  Utah, how do you elect such losers?  The only positive thing I can think of to say about Lee is that he‘s not Mitt Romney, at least not yet!  But it would seem he’s becoming more like him every day!

Lee is rapidly becoming as hysterical as the Democrats.  You would think that such a ‘smart’ guy would obviously realize that no one was ordering him not to speak.  It sounds to me like Lee was just looking for an excuse to support the Democrats’ attempt at an amendment the purpose of which is to hinder the president, without being excoriated by the media and his voters back in Utah.  The DoD didn’t want to discuss how information was obtained in front of the traitorous Democrats attending the briefing, so they didn’t answer questions.  There are many Senators who have proven they would rather see Iran win than the president.  Might Lee be one of those?

And before I come down too hard on those who voted for this guy, Lee was once considered, until 2016, to be in the top 3 Republican Senators by almost everyone in the country.  But then, these are the very same voters who thought it would be a good idea to vote for Willard ‘Mitt’ Romney.  And the fact that Lee has only become pretty much of a turncoat since being re-elected, it can’t be blamed on Utah. DC and its circles of power and money turn good men into liars, thieves, creeps and traitors.  And there is no state that can boast having a perfect congressional delegation.  I’m from Florida and therefore have my own cross to bear with RINO Marco Rubio.

There was a time when I actually liked Lee, but these days not so much.  Because over time I’ve come to realize that he’s really little more than just another opportunistic stooge looking for a little media attention and apparently sees attacking the president as being his best way to get it.  We all need to be on the same team here and if Lee feels that he is simply not able to do that then maybe the time has come for him to either join the other side where he would likely be much more comfortable, or allow the people of Utah to elect someone who is more willing, and able, to support President Trump who is only trying to keep America safe.

And so President Trump continues, practically by default, to expose these snakes and vipers that have been hiding in the grass and disguising themselves as conservatives for years. They should not be permitted to survive another election.  President Trump is an extremely loyal American, something that cannot be said of his predecessor.  And yet it’s our current president that continues to rub so many on our side the wrong way.  Of course those would be the very same ones who favor open borders, unfettered immigration, support bogus ‘climate change,’ and any other issue the Left supports and which runs counter to what those who elected these hypocrites, support.

President Trump has made it possible for many Americans to gain entry into the middle class.  And while his number one focus has been the economy and job creation, he has already done more than his predecessor regarding our ongoing crisis at the border, eliminating those who seek to kill Americans and the strengthening of our military.  Let’s not forget that it was Barry ‘O’ who handed out taxpayer subsidized corporate welfare like candy and couldn’t create “shovel ready” jobs even with an $800+ billion dollar ‘stimulus package.’  And we know about Barry’s comment about the need for a “magic wand” to bring manufacturing jobs back to America.

So voters are going to have a very important decision to make in this next election.  Who is it that best shares their personal vision of American?  Is it any one of the Democrats now running for president?  Is it any of the RINOs now in Congress who seem to be spewing the same talking points as their Democrat colleagues?  Or is it members of the Democrat Party, in Congress, who have thrown everything but the kitchen sink at this president in what has been their continuing effort to impeach him?  Or, is it the vision that President Trump has for our country that most resembles their own?  I know where I stand, I stand with President Trump and I share HIS vision!