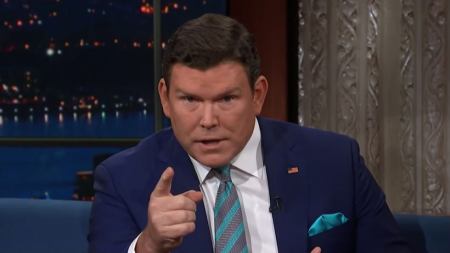 You’ve got hand it to the ‘NeverTrumpers,’ at ‘Fox News’ as they continue to willingly pull out all the stops in their ongoing effort to sound as bat-shit crazy as their media ‘colleagues’ over at the Communist News Network (CNN) and MSDNC.  I say this because it was on Thursday’s broadcast of Fox News Channel’s “America’s Newsroom,” that ‘NeverTrumper’ Bret Baier once again floated the notion that president had yet again done himself in with a comment that he had made about the former corrupt, and now deceased, congressman John Dingell.

It was during his rally in Michigan on Wednesday last night, that President Trump mentioned Debbie Dingell, and how she called to ask him for a state funeral for her husband John.  The president relayed a conversation to the audience that he had had with John’s wife, Debbie, who thanked him for honoring her husband.  According to the president, she told him that her husband was “looking down” and would be “so thrilled” at the gestures the president made to honor the life of a man who hated him.  President Trump added that perhaps Dingell was “looking up” at him.

And of course it was those all across the ‘fake news’ media complex that immediately went nuts, criticizing President Trump for his insensitive remarks about how the now deceased Dingell would have to be “looking up” at the president, obviously implying, that he had gone to Hell. Baier joined in saying the President Trump’s comment will likely hurt him politically.  Baier said, “Let me say one thing about the Michigan incident and Debbie Dingell. The president stepped in it on this. He had largely a political positive even though he was impeached, as hard as it is to believe.”

Baier went on to add, “By saying what he said about Representative Dingell, he really possibly hurt himself not only just politically in Michigan but also just with independents who said ‘do you really have to say something like that?’”  Look, this guy Dingell was far from being a saint, but apparently none of that seems to matter to the NeverTrumpers like Bret.  It’s always the same thing with these folks, anyone and everyone is free to hurl all manner of insults at the president with nary a word being said by anyone.  But let the president return fire and all Hell breaks loose.

So President Trump gave Dingell a state funeral with full honors and then his seat-usurping wife voted to impeach him.  I guess it’s true what they say, no good deed goes unpunished.  And I wonder if Baier considers those who have tried to label President Trump as being such things as a Nazi, a racist or a white supremacist, or have called for his son to be caged and raped, as having stepped in it as well?  Probably not, after all they weren’t serious, right?  But yet one joke about a dead dirt-bag, and once again it’s President Trump who is seen as the bad guy.

Personally, I’m in agreement with the president, Dingell, most definitely, would be looking up from Hell.  After all, that’s where baby-killers go when they die.  I would dare to say that it’s pretty much ALL Democrats who come to end up in Hell.  After all, I’m not sure how being responsible for allowing the death of millions of unborn babies to take place, or creating and enforcing policies that keep millions of Americans trapped poverty or refusing to take the necessary action to keep blacks from killing thousands of other blacks every year, gets you into Heaven.

And where were all of these ‘fake news’ types, now spouting this faux outrage when Dingell was regularly trashing President Trump on social media?  Like in January 2017 when Dingell mocked President Trump’s ability to work with Mexico to secure our borders.  The last laugh, was, unfortunately, on Dingell who didn’t live long enough to see the results of the president’s dogged determination to keep America safe from foreign invaders and to keep illegal aliens from stealing American jobs.  And in October 2016, Dingell tweeted that candidate Donald J. Trump can “go to hell.”

Baier has been a NeverTrumper from the very beginning, but has been getting far more vocal about it.  He’s someone who thinks he’s smarter than everyone else and as such he tends to come across as less of a journalist and more a member of the resistance.  And perhaps Bret can explain why the demeaning comments directed at Washington and Jefferson are acceptable, but the comments about Dingell are not?  After all, all three are dead.  Now I’m not much in favor of wasting time commenting on those underground, but why is it ok for Democrats but not the president.

And when Democrats, as well as their many minions in ‘fake news,’ say about President Trump, “Impeach the motherfu*cker,” or when he’s called Satan, a mass murderer, a racist, a KKK Supporter, and any number of other things by loons like Bobby DeNiro and his many ‘celebrity’ friends, what do we hear from Baier?  Absolutely nothing.  Yet when the president said something that’s probably true, if Democrats even believe in Hell, that’s horrible. I hate ‘Fox News’ and all of its NeverTrumpers, like Baier.  These days he’s on par with the loon, Juan Williams.

Bret still doesn’t get it. Average Americans in fly-over country are not bothered by President Trump’s crudeness. Quite the contrary, we love it, we love the fact that he speaks his mind and takes the fight directly to the Democrats.  We’re tired of watching Republicans sit on their hands as the Democrats bully them right into a corner. We have been waiting a long time for a fighter like Donald Trump to come along and, to be honest with you, Bret, we are more than willing to lose a few “pearl clutching Granny’s” such as yourself so long as Trump is kicking ass and taking names.

Baier is a pompous ass. President Trump, who went out of his way to honor Dingell, now gets a vote FOR his impeachment from Dingell’s village-idiot-of-a-wife, think about it. And she and the ‘fake news’ commentators can’t take a joke?  How offensive is it to be impeached when nothing illegal was done.  The charges are false, the accusations are lies, there was virtually no wrong-doing.  Differences of opinion, sure, but Democrats don’t agree with Republicans on anything and their hatred for President Trump is unsurpassed in the history of Democrats hating Republicans.