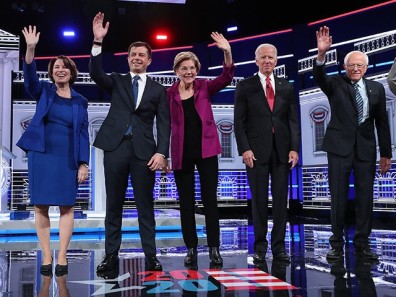 Apparently I am far from being the only one who has chosen not to waste a minute of our precious time watching any of the three ring circus that consists of what continue to laughingly be referred to as Democrat presidential ‘debates.’  And so I consider myself as being in some very good company.  Also, if what I have read is in any way correct, it would seem that neither are all that many Americans choosing to tune in to watch what is other Democrat exercise in futility, that of course being ‘Pencil Neck’ Schiff’s bit of ongoing political theater in his attempt to impeach President Trump.

Anyway, it was the most recent Democrat debate held this past Wednesday, hosted by MSNBC and moderated by a rather bizarre quartet of bimbos possessing far less than your average amount of intelligence, that succeeded in garnering the lowest ratings yet for any of the five debates that have thus far been held.  And that would be according to Nielsen numbers.  On Thursday, Nielsen reported that the debate, which was held in Atlanta, Georgia, had roughly 6.5 million viewers.  That figure also included the 1.6 million of those in the supposed targeted 25-54 demographic.

And in looking back at the four previous debates it was the one held back on October 15th, and hosted by the ‘Communist News Network,’ aka CNN, that received an estimated 8.5 million viewers with 2.4 million being in that same targeted 25-54 demographic.  CNN’s Democrat primary debates in August, which took place on two separate nights, attracted 8.7 million and 10.7 million viewers respectively.  So it would appear that voters aren’t exactly flocking to watch what are less actual debates than they are a contest to see who it is that can be most delusional.

And we need to go all the way back to June to find the most-watched Democrat debate, when an estimated 18 million viewers tuned in to watch the candidates debate for the first time. That debate was hosted by NBC and the two-day event received five million viewers in the coveted demographic.  So might we have here a rather disturbing trend, at least for the Democrats? One that would seem to indicate that interest in their chosen topics of debate is now dropping rather precipitously.  After all, there has been NO discussion on those issues most important to voters.

Democrats essentially created the Ukraine hoax out of whole cloth and only after everything else they had tried to come up with fell apart.  And it’s all nothing more than another attempt to smear the president.  The only certainty involving Ukraine is the fact that ‘Crack Head’ Hunter made big bucks with some energy company along with raking in even bigger bucks courtesy of China. This is what needs to be investigated because it’s pure corruption of the very worst kind.  The Biden Crime Family think only others should go to prison for committing crimes, not them.

And is anyone really surprised at these dismal ratings?  They’re low for a variety of reasons, not the least of which is how these candidates never say anything, they speak only in platitudes, using nice sounding words and phrases, but contain nothing of substance! The ‘moderators’ rarely challenge the candidates to explain how they’re going to achieve their many promises.  Finally, the individuals on stage say the same things each ‘debate!’  Nothing new, only the same ‘promises’ and attacks against the president. The public can see through all their charades and meaningless drivel.

Frankly I’m more than a little surprised that after the first debate there has been anyone tuning in to watch any of these debates.  I mean it was during the first one that it became pretty obvious, pretty quickly, what it was that would be the basis for any debate that would be following, and that during future debates very little time would be spent on discussing those issues most important to the voters with much more time being spent discussing those issues viewed as being important only to the Democrat Party.  Things like open borders, “Medicare for All,” and ‘climate change.’

The vast majority of Americans simply don’t buy into how it is that ‘climate change’ is some “existential threat,” instead they see it as the scam that it is and something that has very little effect on the everyday lives. And they remember being told that New York and Miami were going to be underwater by the year 2000, then it was 2010, 2015 and now 4 years later in the year 2019 we only have 12 more years!  After hearing for 30+ years about how ‘climate change’ is going to bring an end to life as we know it on planet Earth, the American people just are not buying it anymore.

Personally, I think that we all owe the ‘Pencil Neck,’ Adam Schiff, a huge debt of gratitude.  If for no other reason than because he’s done a better job than just about anybody else, including all of these less than impressive presidential wannabes, to show us all exactly what the Democrat Party is truly all about.  Power!  Complete, all-encompassing and unrestrained power, to be achieved at all costs.  And as we have seen there is nothing that the Democrats will allow to stand in their way. Not the Constitution, not the will of the people!  Absolutely nothing.  Thanks, ‘Pencil Neck!’