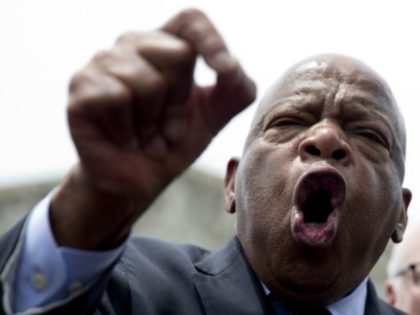 Racist Georgia Democrat, John Lewis, said Tuesday it is now time to begin impeachment proceedings against President Trump, after continued calls from many of his Democrat ‘colleagues.’  But impeach him for what, exactly?  Assumptions?  Just because they don’t like him?  Because he plays their wacky head games better than they do?  Or perhaps for destroying Lewis’ voters base by reducing black unemployment?  What?  I have just five words for the Democrats: ‘Shut up and DO IT!’

It was from the House floor that this corrupt old bigot said, “We cannot delay. We must not wait. Now is the time to act. I have been patient while we tried every other path and used every other tool. We will never find the truth unless we use the power given to the House of Representatives and the House alone.”  And he went on to say, “I truly believe the time to begin impeachment proceedings against this president has come. To delay or to do otherwise would betray the foundation of our democracy.”

Lewis is nothing more than a race-baiting moron. And it was either he or that other racist POS Elijah Cummings (2 rotten peas in the same pod) who years ago said millions of slaves had been thrown overboard from the slave ships trekking from Africa to the Caribbean.  And that sharks still troll those same trade routes waiting for more slaves to feast on.  And this low life is still squatting in the Congress sucking $185,000 a year out of the taxpayers. Yes sir, this is what passes for Democrat intellect.

I wish these Democrats would just go ahead with this insanity and try to impeach President Trump. But all they do is talk, talk, and then talk some more.  Either put up, or shut up!  These dolts are so consumed with their hatred of the president they can even think straight.  If they ever could!  But sadly, we’ve had more than a few RINOs willing to join them, scumbags who need to be removed from office at our earliest convenience because they are no longer of any use.

Lewis is a perfect example of the afterbirth of the civil rights movement. He was only a peripheral player then, but by being a natural born hustler he has carved out a life by convincing people that it’s still 1964 and the whole nation is Philadelphia, Mississippi. He has caused more hopelessness, despair, death and damage to the black community than the KKK could have in a thousand years and the WORST part is that got rather rich doing it and did it all on taxpayer money.

But continue on, John. Indulge your petty, idiotic fantasy of trying to impeach President Trump. PLEASE! All your pedantic effort will do is waste time and OUR money- even if the Democrat fools, idiots, misfits, miscreants, and misanthropes in ‘the majority’ DO vote to impeach the president, it will NEVER fly in the Senate, and truthfully, your charges are so meritless, petty, childish, and not provable that the people, or least most of them, will never accept your baseless impeachment vote.