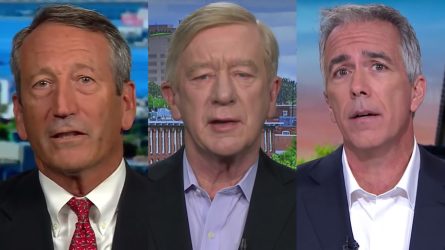 So, what happens when three hapless RINOs let their ‘Trump Derangement Syndrome’ (TDS) get the better of them?  Well, if you happen to be Mark Sanford, Joe Walsh and Bill Weld, you announce that, for the good of the Republican Party, and the country, you have now decided to issue primary challenges against President Trump in order to prevent him from further damaging the party they claim to love.  While they would like nothing more than for us to see them as being selfless public servants who are interested in nothing but what’s good for the country, just the opposite is true!

According to these three they are “running for the Republican nomination for president in a race that will inevitably highlight differences among us on matters of policy, style and background.”  And they claim to have been brought together “not by what divides us but by what unites us: a shared conviction that the United States needs a strong center-right party guided by basic values that are rooted in the best of the American spirit.”  No, what actually brought them together is their common hatred of the president and their desire to maintain the Washington status quo.

They say that “a president always defines his or her party.”  And they have arrived at the conclusion that the Republican Party, under President Trump, has taken a wrong turn and in so doing has “abandoned the bedrock principles of the GOP.”  An odd thing to be hearing from such committed RINOs.  And they also claim that “in the Trump era, personal responsibility, fiscal sanity and rule of law have been overtaken by a preference for alienating our allies while embracing terrorists and dictators, attacking the free press and pitting everyday Americans against one another.”

I guess I would ask all three of these clones where they were during the entire eight years of the Obama reign?  In hiding?  It becomes very obvious, very quickly, what is truly driving them in their effort here, and it is to ensure that it’s a Democrat, any Democrat, that wins the White House in 2020.  Because let’s face it none of these guys are actually running to win, because not one would have a snowball’s chance in Hell of actually winning.  Weld isn’t even a registered Republican and was a very liberal governor, Sanford ran around on his wife and Walsh appears to be closet racist.

And what they’re now all whining about is the fact that the Republican parties of four states, so far, Arizona, Kansas, Nevada and South Carolina, have decided that they simply aren’t going to play the game these three are trying to play and have, therefore, canceled their nominating contests, resulting in the incumbent being crowned the winner of these states’ primary delegates.  And of course, they claim, “there is little confusion about who has been pushing for this outcome.”  And if you said it’s the evil Donald Trump who they claim is behind this move, you’d be right.

They describe it as being nothing more than “an effort to eliminate any threats to the president’s political power in 2020.”  And, they ask, “What does this say about the Republican Party?”  They claim, “If a party stands for nothing but reelection, it indeed stands for nothing.”  And then, making clear their delusions of grandeur, they claim, that “each of us believes we can best lead the party.”  While I’m glad these fellas all have such a rather high opinion of themselves, not one of them strikes me as someone who, as president, would actually work to put America first.

And then they went on to whine, asking if Republicans “really want to be the party with a nominating process that more resembles Russia or China than our American tradition?”  And claimed, “Under this president, the meaning of truth has been challenged as never before.”  And they went on to ask, “Are we to leave it to the Democrats to make the case for principles and values that, a few years ago, every Republican would have agreed formed the foundations of our party?”  So the ‘values’ for which the Democrats are now making a case, were once Republican values?

And I thought it odd to hear from three RINOs about how it is that “millions of voters looking for a conservative alternative to the status quo deserve a chance to hear alternate ideas aired on the national stage.”  Odd because, I would argue, that while these three apparently all view themselves as being a better alternative to President Trump none of them have never before been the least bit interested in presenting an alternative to the status quo, conservative or otherwise.  And yet we’re just supposed to throw President Trump overboard and go with one of them?  Not gonna happen.

They wrote, “If we believe our party represents the best hope for the United States’ future, let us take our message to the public and prove we are right.”  I find myself wondering what more it would be that any one of these clowns could do that would do more to show that the Republican Party is the best hope for America than what President Trump has already done after having been in office for a little more than two and a half years.  And I would be curious to know just what it is that President Trump has managed to accomplish that they now stand so opposed to.

Might it be a booming economy courtesy of his reducing thousands of needless regulations and his working with congressional Republicans to reduce taxes?  Or is it the fact his policies have resulted in our lowest unemployment numbers, especially for minorities, in decades.  Or are they in favor of allowing our NATO ‘allies’ to continue to happily allow U.S. taxpayers to cover the cost of their defense.  Or maybe they’re perfectly content, as have been many RINOs before them, to allow China to continue to screw us over courtesy of very lopsided trade deals?  So what is it?

Anyway, they went on to whine, arguing, “The saying ‘may the best man win’ is a quintessential value that the Republican Party must honor if we are to command the respect of the American people.”  They wrote, “Cowards run from fights. Warriors stand and fight for what they believe. The United States respects warriors. Only the weak fear competition.”  In 2016 Republican voters selected from a field of 16 candidates from which to select who they saw as being best for the job of president.  They chose Donald Trump because he was willing to fight for what THEY believed.