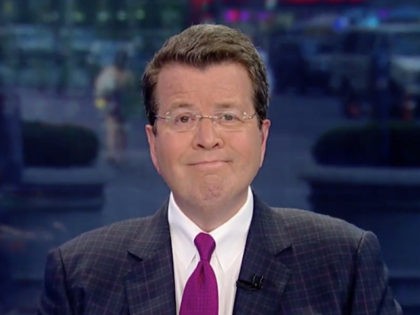 Have you ever noticed how there is nothing that squeals louder than a stuck NeverTrumper, and especially one of those NeverTrumpers seen on Fox News?  And make no mistake regardless of their claim to be “fair and balanced”, the network, over the past few years, has become considerably less of both as well as for more antagonistic toward conservatives.  Fox News, for the most past, has now become ‘Faux News,’ and because of those like Bret Baier, Shepard Smith, Judge ‘Napi’, Chris Wallace and many others, I’ve come to spend much less time watching the network.

And this past Thursday another of the network’s more vocal NeverTrumpers made it known that, by golly, he’s no stooge of this president.  It was during “Your World with Neil Cavuto,” that the show’s namesake took it upon himself to spew a bizarre monologue, aka rant, the apparent purpose of which was to slam President Trump for daring to criticize Fox News on Twitter.  Cavuto is another one at Fox who I once actually enjoyed watching, but have grown tired of mostly because I think the old Cavuto would likely despise the New Cavuto for thinking that his audience is stupid.

Cavuto said, “I think the president watches Fox. I also think he’s getting sick of Fox, which is weird because I think he gets pretty fair coverage on Fox. But the president making clear that to fact-check him is to be all but dead to him and a legion of supporters, who let me know in no uncertain terms that I am either with him totally or a never-Trumper bully.”  He continued, “First of all, Mr. President, we don’t work for you. I don’t work for you. My job is to cover you, not fawn over you or rip you, just cover you — call balls and strikes.”  Sounds to me like the president hit a nerve.

Anyway, Cavuto then went on to say, “Our job is to keep score, not settle scores. In my case, to report the economic numbers when they’re good and when they’re bad, both when the markets are soaring and when they’re tumbling, when trade talks are looking like they’re coming together and when they are looking like falling apart. It’s called being fair and balanced, Mr. President.”  He added, “You’re entitled to your point of view, Mr. President. But you’re not entitled to your own set of facts.” Cavuto accomplished nothing with his idiotic rant other than to make himself look like an ass.

Cavuto is one of those there at the network who does all that he can to constantly provide a little rain on the President and does so very passively, and sort of on the sly. The manner in which he questions his guests seems to depend entirely upon their relationship to the president, with a more aggressive line of questions being reserved for those closer to the president.  He’s also not above coming out with some sort of negative hypothetical and then attempting to give it legs, I’ve noticed it for years.  Also I haven’t really considered Cavuto to be ‘fair and balanced’ for awhile.

And when it comes to the Democrats’ ongoing efforts to try to stir up fears regarding a pending recession as their latest ploy to bring about the defeat of President Trump in 2020, I have absolutely no doubt that Cavuto will more than happy to assist in that endeavor in any way that he can.  I’m sure he will gladly lend a hand by adding whatever level of authenticity that he can to the very bogus claims of an economic downturn that is supposed to be right around the corner.  He’d likely see it as just doing his part in the effort to ensure that President Trump is defeated.

Really, President Trump’s only complaint is the very same thing that so many other viewers have been complaining about. That Fox News brings on Democrats, allows them say all manner of outrageous things, never challenges them in any meaningful way before proceeding to give more time to spew their idiocy.  And it’s those on the right who are allowed to barely get a word in edgewise and are then endlessly challenged.  And Fox polls are farmed out to anti-Trump pollsters who sample more Democrats making the polls believable. Fox News has sold out and everyone knows it.

Look, I don’t need to constantly be told how great and wonderful the president is, but if you’re not going to at least be giving him a fair shake then I’m not going to watch you.  And I if I’m going to be subjected to the very same sort of ‘fake news’ drivel coming from many of the headliners on Fox News that is being spewed by the drones there on CNN and MSNBC, then where’s my incentive to watch Fox?  So for the most part I’ve pretty much given up on the network except for those occasional times when there is nothing else to watch and I tune in to Tucker, Hannity or Ingraham.