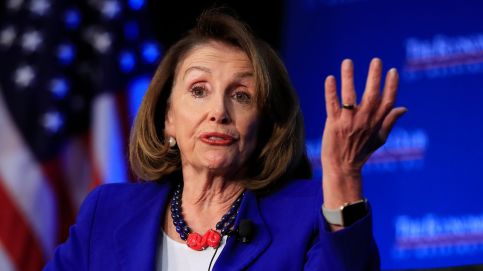 I must admit that I always have to laugh whenever I hear Democrats describing what is and is not “moral behavior.”  Because, quite frankly, I can’t think of a more immoral bunch of people than anyone involved, and in any way, with the Democrat Party.  And so once again we have Nancy Pelosi lecturing us on morality.  And what is it that once again has caused a rather sizable bunch in the panties of Ms. Pelosi?  Well, that would be the new Department of Homeland Security (DHS) rule that effectively ends the catch-and-release policy regarding illegal aliens claiming to be asylum seekers.  Pelosi was quick to accuse President Trump of “seeking to codify child abuse.”

And so in yet another statement of condemnation directed at President Trump and his administration it was Pelosi who said, “The Administration is seeking to codify child abuse, plain and simple.  It’s appalling, inhumane family incarceration plan would rip away basic protections for children’s human rights, reversing decades-long and court-imposed rules and violating every standard of morality and civilized behavior.”  And I would argue that to describe this as merely being hypocritical is to belittle what was an attempt by Pelosi to portray the effort by this president to keep the American people safe as being something sinister just to score some cheap political points.

This new rule that has so offended Pelosi was issued in response to the unprecedented flow of families across our border.  The goal is to end ‘catch and release.’  Asylum-seeking families will no longer be released into the United States with a mere promise to appear in immigration court, promises that for the most part go broken.  Pelosi repeated the same old claims that holding illegal alien children in custody is abusive and that the children are being subjected to deplorable conditions.  However, apparently it’s a very different story when it comes to the murdering of children while they are still in the womb, or even within minutes of having left the womb.

Anyway, Pelosi said, “The indefinite and prolonged detention of children would compound the cruelty and accelerate the heart-breaking humanitarian situation at the border, worsening conditions for children already forced to sleep on concrete floors, eat inedible food and be denied basic sanitation and standards of care. As the American Academy of Pediatrics has written, ‘No child should be placed in detention…even short periods of detention can cause psychological trauma and long-term mental health risks.’  What about how no child should be murdered before it has a chance to live simply because of the misfortune of having a liberal ‘mother?’

But, it was from there that the dingbat, Pelosi, went on, to say, “This inhumane and utterly unconscionable rule circumvents the conditions set in the Flores settlement, and we expect the District Court to swiftly strike it down. Democrats continue to call on this Administration to end its assault on families and children, and to join us to protect families and preserve America’s heritage as a beacon of hope, freedom and opportunity for all.”  Does this evil old hag not even hear her own words?  Democrats continue to call for an end to the assault on families and children??  Really?  They obviously seem to be more than just a little selective in that endeavor.

And as longs as Pelosi brought up the subject of “morality,” it’s important for us not lose sight of those things that she, and her entire Democrat Party, actually consider to be ‘moral’ and civilized.  You know, things like abortion right up to, and even after the moment of birth, to allow immigrants to stream, unabated, across our border, placing at risk the lives of untold numbers of Americans, to allow men into women’s restrooms and every other sort of perversion imaginable.  And yet it is President Trump who’s being accused of ripping away basic protections for children and violating every standard of morality and civilized behavior.  Does that make sense?

So I wonder, what is it going to take for the American people to finally wake up and to stop listening to these crazies like Pelosi and come to view the Democrat Party as being less of viable political party and more of this rather odd assortment of crazy loons who should never, ever, actually be placed in the position of governing our country.  Such a thing would likely turn out to be your worst nightmare on any number of levels.  And do you suppose that there will EVER come that proverbial straw that will finally come to break the camel’s back?  At this point apparently not as there currently seems to be no end in sight to all of the continuing craziness.