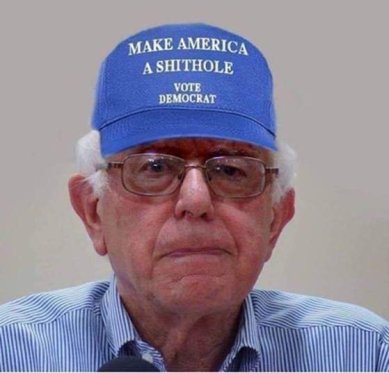 In going back to the very beginning of this our current 2020 presidential campaign season, just what is it that any of us have learned thus far about those on the Democrat side who are now all vying to be the one to take on President Trump in the next election.  Well, for one thing it would seem that there is pretty much nothing that they will not promise, and even less that they won’t somehow make ‘free’ to those who need only to vote Democrat.  Vote Democrat and you will be rewarded.

As a for instance, it was just this past Monday that nine of our hate America Democrat presidential hopefuls, including ‘front-runners’ ‘Creepy Joe’ Biden, along with Commies Bernie Sanders and Elizabeth Warren, all attended something called the ‘Poor People’s Moral Action Congress’, and what was witnessed by those in attendance was pandering on a near epic scale with each of these contenders desperate in their attempts to see just who it was that could promise the most ‘free’ stuff.

It really was quite the spectacle for anyone who actually chooses to work for a living. Apparently none of these candidates believe that actually having a job is the way to go when trying to come up with a way that would actually result in either ending poverty all together or at least to reduce significantly the number of people living in poverty.  For them, “work” seems nothing more than a dirty word. Their approach is to take money from those folks who work and to hand it over to those who don’t.

And please don’t anyone be fooled by this group, the ‘Moral Action Congress.’ There’s nothing moral about forcing hardworking people to support those who, for whatever reason, feel that they are somehow above having to work to support themselves.  Sadly, it is now one in every five American households that lives entirely, or mostly, off government’ benefits.’  And a shocking three-quarters of able-bodied food stamp recipients, with no children, still don’t feel the need to work, even part time.

So anyway Monday’s little gathering, the supposed focus of which was supposed to be poverty, was led by those claiming to be disciples of Rev. Martin Luther King Jr., but in reality are anything but, since most of their time was spent on distorting King’s message.  Because it was the organizers of this freak show who demand that the government actually guarantee everyone an annual income, free college, free health care for all and a “decent house to live in.” They claim these are “rights.”  Seriously?

But people who works for a living knows better. These are not, in any way, rights that the government, in any way, owes you. These are things that you go out and earn for yourself.  And you know, let’s not forget that what the government giveth, the government can, just as easily, taketh away.  And what you earn, what you go and work for, is yours.  But I guess a lot of people see taking all that ‘free’ stuff as being worth the risk as long as they are not being forced to go to work every day.

And it was the event’s organizer, Rev. William Barber, who railed about how it is that nearly half the nation, 150 million people, is mired in poverty and suffering.  Now you’d have to be a complete moron, or a very committed Democrat, not to realize that that is really nothing more than a blatant lie, though none of the candidates apparently saw the need to set the record straight.  So here we have yet another supposed man of God doing little more than to spread hate and discontent.

Contrary to the good ‘reverend,’ the truth is that as of 2017 40 million people, or about 12 percent of the population, earned less than the federal poverty line, which is currently $12,490 for a single person and $25,750 for a family of four.  And also what the reverend conveniently ignores is the fact that almost no one actually lives on that.  Because all but about 3 percent collect some sort of welfare payments that lift them out of poverty. So they depend on government, instead of themselves.

Our booming economy, the same one that ‘Creepy Joe’ is now demanding credit for having created, is a chance to turn all of that around and to help the poor finally escape their continuing dependence on the government.  Employers are now dropping such requirements as college and prior experience in order to hire more people.  It’s not jobs that are scarce.  It’s workers that are scarce.  And yet, oddly enough, not one candidate at this poverty event even bothered to bring up the subject of jobs.

In fact, far from promoting work, these Democrats, every single one of them, now running for president wouldn’t hesitate in the least to throw millions of Americans out of work. The Democrats’ major policy proposals, Medicare for All, the Green New Deal, rejoining the Paris Climate Accord, open borders for illegals and tax hikes on corporations, are all job killers.  Medicare for All alone would cause 2.5 million people, mostly hospital workers and medical administrators, to lose their jobs.

The ‘Green New Deal’, the Democrats’ latest scheme to combat ‘climate change’, threatens the jobs of millions of workers in the mining and oil business.  And yet it’s Bernie Sanders, who says there can be no middle ground on carbon emissions, also claims to be leading a “movement of working people.”  And Democrats continue to favor open borders, and have no problem with illegal immigrants are driving down wages for low-skilled American workers.  So why do you think that is?

Oddly enough it was in what was his final Sunday sermon in 1968 that Rev. King explained that a person who “doesn’t have a job” has “neither life nor liberty.”  And yet here we are heading into the next presidential election and what is the message that we are hearing from every Democrat candidate?  Democrats want fewer jobs forcing more into dependence on government. As well they also support the notion that the poorer they can make America, the better off the rest of the world will be.

I think, especially during the tenure of Barry ‘O’ and ‘Creepy Joe’, it became painfully obvious that then Democrats had little interest in doing anything other than to wreck the economy on purpose.  Barry’s books show that he believes that all the world’s problems are caused by American intervention in other nations’ affairs and he believes that all of the world’s poverty is caused by American wealth.  Therefore, he was driven to do everything that he could to make America weaker and poorer.

And besides, making America poorer has always been good politics for Democrats.  Barry ‘O’ did NOT want the economy to prosper because people who are earning money aren’t as willing to support spending increases as people who depend on government.  Unfortunately, the rest of us were little more than collateral damage in his effort to destroy to the greatest extent possible America ever being able to rebuild what had once been an economy that was the envy of the entire world.