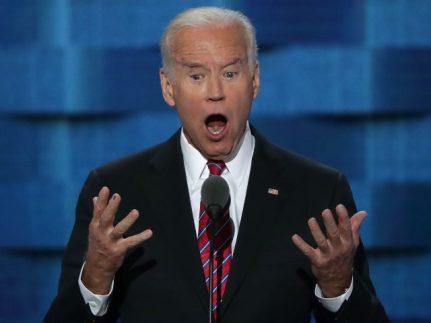 So in his effort to win the presidential sweepstakes and be selected as the Democrat who takes on the president in 2020, ‘Creepy Joe’ Biden has decided to make a pretty bold claim.  His claim?  That this booming economy we are now experiencing has everything to do with the policies put into place by his former boss, Barry ‘O’, and absolutely nothing whatsoever to do with the policies that have since been put in place by President Trump.  So a guy who was part of the duo who blamed everything that went sour during their tenure on President Bush, now wants to take credit for everything good that has taken place since they left office.  Does he really think we’re that stupid?  I can only assume that that must be the case!

‘Creepy Joe’ has now gone so far as to actually demand that credit be given where no credit is due when it comes to the booming economy under President Trump.  ‘Creepy Joe’ recently took to Twitter to complain, and in so doing tweeted, “Let’s be clear: President Trump inherited a growing economy from the Obama-Biden administration.”  And then he went on to add, “And now, he’s in the process of squandering it.”  Squandering it?  Has ‘Creepy’ not been paying attention, or is he really that dishonest?  What ‘Creepy’ refers to as a “growing economy” is one that was limping along at barely 1 percent growth, since President Trump took office, and slashed thousands of burdensome regulations, it’s now growing at over 3 percent.

So, might ‘Creepy Joe’ actually be justified, in any way, in making this claim?  Well, not exactly.  But that’s only because the list of accomplishments from the era of Barry ‘O’ and ‘Creepy Joe’ includes: 1. Lowest labor participation since the 1970s, 2. Nearly 95 million Americans out of the labor force, 3. Worst economic recovery since the 1940s, 4. Lowest home ownership rate in 50 years, 5. Nearly 13 million more Americans on food stamps under Barry, 6. Over 43 million Americans living in poverty, 7. The median household income lower now than in the 1970s, 8. 1 in 5 families without someone in the workforce, 9. 1 in 6 men ages 18-24 are either incarcerated or out of the workforce and 10. More debt than all other presidents combined.

Now compare all of that against what has taken place, and in just two and a half short years, since President Trump came into the White House.  We now have millions fewer Americans on food stamps, which is likely only because unemployment for blacks, Hispanics, women, Asians and teenagers are now all at all-time lows, and the GDP is now growing at 3 percent annually.  The duo of Barry ‘O’ and ‘Creepy Joe’ was the ONLY administration NEVER to get a 3 percent annual growth, yet ‘Creepy Joe’ now wants credit for something that he’s had nothing to do with?  Again I have to ask, does he truly think we are so stupid as to believe ANYTHING he says?  And his idiotic claims about the economy makes clear that we can’t believe him!

To be honest, this is nothing more than yet another example of what Democrats do best, take credit.  Let’s be honest, Democrats don’t want to actually accomplish anything, they simply want to take credit for it.  Democrats not only can’t improve the economy, they have virtually no interest in doing so. And the reason is simple, because employed, successful and prosperous people tend not to need handouts from Democrats, so Democrats are unable to purchase their votes with taxpayer money. Democrats need poverty in order to create the ‘need’ for Democrats to run to the ‘rescue.’  Democrats don’t help people in poverty, Democrats actually are responsible, and singularly so, for people being in poverty.  It’s all by design.

Democrats like to talk as if they actually favor of a strong, robust economy.  In fact, it was Hitlery who once said, “The economy ALWAYS does better when there is a Democrat in the White House.”  But it’s while they are making such claims that at the very same time they are doing and proposing everything they can that has and/or will actually bring about the weakening of our economy.  So why would they want to do that, you might ask. Well, because these leftwing traitors-to-our-Constitutional Republic know that a weak economy, with tens of millions out of work, it becomes far easier for them to get more people addicted to any number of various government programs, which makes them far more likely to vote for Democrats.

What the Democrats, and the dynamic economic duo Barry ‘O’ and ‘Creepy Joe’, do get credit for is the tanking of our economy, hampering our manufacturing sector as well as our ability to become energy independent, for essentially forcing more people onto the government dole, essentially requiring people to get two part time jobs just to make ends meet as a result of Obamacare bringing to an end millions of full time jobs, for setting race relations back decades, for taking our culture to the depths of Hell courtesy of infanticide, gender confusion, celebrating all manner of depravity and perversion, ushering in what they’re selling as the ‘joys’ of Socialism, and for doing all they could to bring America to the brink of totalitarian tyranny.

It is not too much of a stretch to say that ‘Creepy Joe’ is little more than a lifetime liar and a worthless do nothing with zero accomplishments to show for his over 50 years spent at the taxpayer’s teat as an elected official.  He possesses zero leadership skills or ability, is just another big government advocate, he has never held a private sector job, he’s lazy, he’s old, a complete moron as well as being more than just a little ‘Creepy.’  He has NOTHING to bring to the table to make America better, ‘Creepy’ represents a ‘Barry ‘O’ third term which will only take this country backwards.  I recent read somewhere that a group of economists had said that if Hitlery had been elected our economy would now be toast, not booming.

Life sure must be good when as a sleazy, corrupt politicians can spend 8 years blaming their predecessor for their own failures and then, for over 2 years, attempt to take credit for those things that have been done to improve America that they had absolutely nothing to do with. Our ‘America First’ President has done more in 21/2 years than Democrats have done in decades, Democrats never have any interest in making America better when in charge.  Now they want credit for President Trump’s successes, despite their overwhelming opposition. The Democrats are a treacherous group. They promise Socialism, and the demise of our freedoms. The Democrats have nothing to offer, and only stupid people would vote for any of them.

In looking back it was ‘Slick Willy’ Clinton who still somehow gets credit for the economic boom that was a direct result of President Reagan’s and Bush 41’s economic policies.  George W. Bush was blamed for the crash in 2008, the groundwork of which was first laid in the late 1970s when then president Carter signed into law something called the ‘Community Reinvestment Act’, something that was made even worse by ‘Slick Willy’.  Bush was also blamed for the recession that followed although it was the policies put in place by Barry ‘O’ that only made it worse.  President Trump takes over, makes massive changes and the economy booms, and it’s ‘Creepy Joe’ who then tries to take credit, and who is now running around saying, “I built that!!”