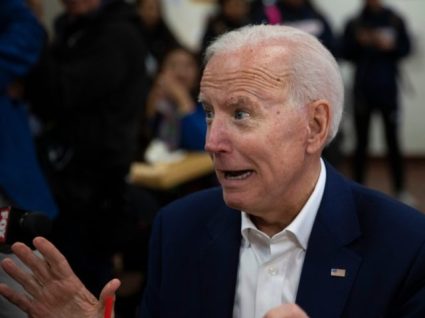 If I didn’t know better I’d swear old ‘Creepy Joe’ was already asking for a recount in an election that hasn’t yet even taken place.  Because it was earlier this week that our ex-vice president and potential 2020 Democrat presidential nominee, in an effort to do I’m not sure what, dipped into election conspiracy territory arguing that fellow ex-vice president Algore did not actually lose the presidential election back in 2000.  So he too is yet another Democrat who was cheated out of a victory that was his.

So can we also assume that ‘Creepy Joe’ must also think that Japan won World War II, the New York Yankees took the 1960 World Series, Adlai Stevenson defeated Dwight Eisenhower and Jimmy Carter won a second term in the 1980 presidential election?  Who knew?  What a twit.  So to be honest, it is now my very fervent hope that ‘Creepy Joe’ does turn out to be the Democrat nominee because I think that his rather advanced age would become all the more obvious on a debate stage standing next to President Trump.

Anyway, it was during a conversation about his nineties-era crime bill that ‘Creepy’ made the claim that things got worse after Gore lost the election.  It was at a campaign stop in New Hampshire that ‘Creepy’ told the few that had gathered, “I wouldn’t say lost, when a hanging chad sort of did a few things.”  ‘Creepy’s’ idiotic remark continues a history of doubt that the left has cast on the results of the 2000 election.  It’s a lie and he knows it’s a lie, and yet he continues to repeat it.

Despite the never ending claims to the contrary, it was a widely hailed investigation funded by eight major ‘news’ organizations in 2001 that concluded that George W. Bush would have won despite the Supreme Court ruling in 2001.  And yet that was simply not enough to satisfy the many loons who reside on the left and so they have continued to perpetrate that which they know to be a lie in what has become their continuing effort to bring about a lack of confidence in our election process.

So for those who continue to reside in that same little ‘Twilight Zone’ kind of a universe as ‘Creepy’, we’ll go over it again.  Yes, Algore lost!  And why?  Well, simply put, because more states voted for George W. Bush than did for Algore.   Because, as we all know, states vote for president, not people.  You are voting for whom you want your state’s electors to vote for in the Electoral College.  Hence the rationale now coming from a growing number of Democrats for scrapping the Electoral College.

Democrats continue to call for elections to be determined by popular vote which would be much like a football game being won by the team with the most yards, not by the team with the most points.  Perhaps the number of counties won should become the standard for determining who it is that’s been declared the winner of a presidential election. For instance in the last election, Donald Trump won 2,622 counties and Hitlery, of the hate-America Democrat Party, won 490.

And there is a method to the madness behind the entire ‘stolen elections’ narrative.  If you’re hoping to motivate tens of thousands of your activists across the country what better way would there be than to convince them that the ‘other side’ has been cheating all along so they then feel justified in doing the same.  But there’s just one thing wrong with that, the ‘other side’ hasn’t been cheating so there’s nothing to retaliate against.  So we end up with one side, the Democrats, doing all the cheating.

The methods for motivating these ‘activists’ are pretty numerous.  After all, there is no shortage of people who know how to cheat, especially in states where Voter ID laws have been declared unconstitutional, which only serves to encourage voter fraud, and/or allow same-day registration as well as where absentee ballots are not checked to see who really filled them out, or if those voters really exist and really voted.  Remember, in the last election, some places had voter turnout well over 100%.

Why is it, do you think, that in these more recent times every time a Democrat loses an election they insist upon claiming that they didn’t really lose at all?  In fact, not only did they NOT lose, they actually won and then were somehow cheated out of their victory?  Is it because they’ve gone through their entire lives being little more than recipients of various ‘participation trophies’ or maybe because teachers and professors gave them a passing grades regardless of the quality of their work?

Now in getting back to ‘Creepy’, I’m not discriminating against him because he’s older than dirt, just like I didn’t discriminate against Barry ‘O’ because he was black, or against Hitlery because she was a woman.  The only reason that I chose not to vote for Barry or for Hilery, is the very same reason I would never vote for ‘Creepy’.  And that would, of course, be because of their overwhelming hatred of America and their continuing effort to destroy it in what is their continuing quest for political power.

But regarding the whole age issue, if he were to actually win the next election it would be by the time that he officially assumed office that ‘Creepy’ would be older, at 78, than Ronald Reagan was, at 77, when he came to the end of his second term.  And keep in mind whomever he would select as his VP would be a mere heartbeat away from being president.  And amongst those names already being floated as his potential vice-president are names like Kamala Harris and Stacy Abrams.

Now I don’t know about you, but the just the idea of having either one of those leftwing loons as his VP is more than a little frightening.  And to be honest, I wouldn’t trust either one of these two loons, were either one of them actually selected as ‘Creepy’s’ potential number two , not to give old ‘Creepy’ a bit of a nudge while at the top of a very steep, and very long, flight of stairs.  After all, old people take some pretty severe tumbles all the time.  So I doubt anyone would be too shocked.

But with all that said, ‘Creepy’ may not even be who ends up getting the Democrat nomination.  After all, I think the Democrats are now up to 23 or 24 potential candidates with each new candidate being crazier than the last.  And while ‘Creepy’, at least at this point in time, seems to be leading the pack, I’m sure everyone remembers how back in 2016, when we had 16 Republicans running, it was Jeb Bush who everyone thought would end up being the nominee.  So a lot can still happen.