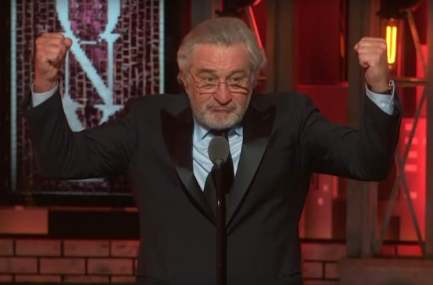 I’ve often wondered how it is that a guy who has made a career out of playing the very same character in virtually every single movie he has ever been in can somehow be seen, by anyone, as being one the greatest ‘actors’ of all time.  Once again we have a washed up, has-been Hollyweirder, Bobby DeNiro, seeking what all has-beens want: attention and relevance.  And while he has gained some attention, he remains irrelevant, but for being a vulgar, foolish moron seeking attention any way he can get it.

Bobby said, “I’m happy to stand with Samantha Bee tonight to support the First Amendment – the right of the president to be a relentless and unrepentant, lying scumbag, the right of his supporters to not give a shit, and our right to do something about it.”  The real White House Correspondents’ dinner took place on Saturday, although it was a rather silly affair. And for the third time the president again chose not to attend, opting instead to hold a rally for supporters in Green Bay, Wisconsin.

I think most folks are well aware of how Bobby has repeatedly attacked President Trump for over 3 years now, often using award ceremonies and speaking engagements as his venue of choice.  Just this week, Bobby fantasized about putting President Trump in handcuffs and taking “him away in an orange jumpsuit.” And to be honest at first I wasn’t even going to bother commenting on this loon’s latest outbursts.  And really, it’s more of a plea on my part for him to just give it all a rest for a while.

And it was in an interview with Stevie Colbert that Bobby said, “We have a wannabe gangster in the White House now.”  Going on to say, “Even gangsters have morals; they have ethics, they have a code, and you know, when you give somebody your word that’s all you have is your word, especially in that world. This guy, he doesn’t even know what that means.”  But where was all this same ‘supposed outrage’ during the eight long years that we had what was nothing less than a thugocracy under Barry ‘O’?

Poor little Bobby. He seems to be stuck in a different decade, in a time when perhaps more of us were all in a little awe of our celebrities, celebrities who tended to keep, for the most part, their politics to themselves.  These days we all know, or should, that what we have is a bunch of satanic freaks. They grossly underestimate the intelligence of most Americans.  Sorry Bobby, but you’re basing your significance on those within your own little “circle of trust” who are all just as warped as you are.

And you’ll notice Bobby never actually provides any real evidence to back up any of his nutty accusations or name calling, nor does he explain how being in favor of border security, fair trade, low taxes and more prosperity for all is the equivalent of being an immoral gangster.  As if morality means anything to those on a hypocritical left which has come to consist of all manner of perverts, drunks and drug addicts.  Morality on the left has long been dead, and yet they continue to lecture us.

Bobby has become just so predictable with his endless spewing of easy one-liners and as a result has deteriorated into nothing more than a media hyped, overpaid moron who rarely, if ever, utters a single intelligent point or rational criticism.  Like most of those in Hollyweird, Bobby seems to think that just being able to read words written by someone else somehow equates to being able to advocate for certain policies and to make decisions affecting ‘real’ people, living ‘real’ lives in the ‘real’ world.

Bobby is a tired, demented old man who knows that his ‘career’ is now pretty much over, and having now reached the end is desperately seeking some way, any way, to gather a crowd.  And so he attempts to stroke his wounded vanity by making a spectacle of himself.  And he seems not to care that in his effort to attack President Trump he comes across as being nothing but a buffoon.  But still he persists, as if by receiving accolades from those around him alters how many Americans view his antics.

Bobby is simply another one of those on what has become a rather long list of many who are really nothing more than uneducated, high school dropouts who pretend to be someone smarter than they really are.  They seem to think that just because they can act, or sing, that somehow we’re supposed to see them as being extremely intelligent.  But on the contrary, acting, or singing, are both activities that actually require a very limited amount of actual intelligence.  These people merely pretend.

Bobby obviously loves to spew his hatred of this president, but he has no problem supporting a Democrat Party that has now moved so far to the left as to make it barely recognizable from what it was just 10 years ago.  And how it is that we know that?  Well, you need look no further than at what the party platform now consists of here in 2019.  Because the party platform makes very clear just how radical the Democrat Party has become and why those like Bobby so enthusiastically support it.

So what does the platform of the modern day Democrat Party, the party of Bobby and his friends there in Hollyweird, consist of?  Well I’ve put together a short list of just a few of those things supported by the Democrat Party and it follows here:

And so this appears to be where the Democrat Party is today, and therefore anyone who dares to support President Trump, or chooses to stand in opposition to the level of pure insanity that is now emanating from the Democrat Party are to be attacked in the most vicious way possible.  It’s all about intimidation!  We who disagree with this leftwing insanity must be beaten into submission, sometimes figuratively and sometimes not, and forced to agree with all that which we view as being wrong.

But I for one will continue to proudly stand in opposition to this party of lunatics that seems to be so determined in its effort to destroy the country that I love.  And too, I will proudly vote for those, including our president, who do not hesitate to do the same.  Punks like Bobby are little more than the equivalent of the dog crap one scrapes off the bottom of one’s shoe.   And if it’s anyone who can be described as being a “unrepentant, lying scumbag,” it would be Bobby and all of those like him.