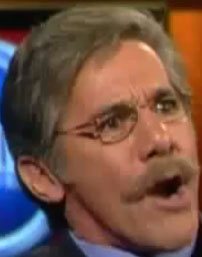 I often find myself being a bit confused whenever trying to determine who it is that is the bigger empty-headed progressive who routinely appears on Fox News.  It’s become far more difficult to choose in recent years as there are now far more many candidates from which to choose.  But out of all them there are two who, like turds in the toilet bowl, routinely float to the top.  And they are, of course, Jerry Rivers, aka Geraldo Rivera, and his fellow liberal nutjob, Juan Williams.  Adding together the IQs of these two imbeciles wouldn’t even get you out of single digits, and yet there they are on Fox News, and pretty regularly, as if anyone with half a brain gives a squat about their opinion may be on any of the more important topics of the day.

Now not to say that Williams hasn’t made some of his trademark nutty statements of late, my focus here will be on some of the more recent nonsense uttered by Jerry, aka Geraldo.  Because, you see, it was very recently that Jerry made the rather idiotic claim that President Trump is, as well as are many other Americans, simply being too harsh in their skepticism of these migrant caravans of illegals defiantly waving their own nations’ flags while doing the best that they can to stamped across our southern border.  Personally, it seems to be that that’s a gesture one would expect to see from an invading army, not the conciliatory posture one would expect to see from refugees desperate to flee their ‘oppressive’ countries.

It was during a recent appearance on ‘Fox and Friends’, one of the very few things I watch on the network these days, that the 75 year old and somewhat senile, Jerry went so far as to say, “You’re being way too harsh.”   And it was from there that he then went on to say, “These are very unsophisticated people. They are an uneducated group. They cling to some symbols of stability in their lives. All they want to do is feed their children.”  Right, but that’s just what Americans want too but without having to subsidize all of these illegals.  To me a mass horde of uneducated, poor people flooding into the United States sounds like little more than a recipe for how to destroy a first-world country and as well as our now thriving economy.

What apparently caused Jerry to slip a cog, so to speak, was President Trump’s observation that these caravans of migrants are not refugees with legitimate claims of asylum, but are, instead, merely opportunists hoping to enter the U.S. illegally so they can then proceed to scam what is our many, overly generous, public assistance programs.  And has been reported by a number of outlets is how most of these migrants refused offers of asylum and employment in Mexico, saying they want only to come to the U.S.  Oh and by the way, child smugglers, MS-13 gang members, and potential terrorists have also infiltrated these caravans.  Remember when Democrats opposed illegal immigration?  But that was then, before it was racist.

President Trump said: “They come up and they are talking about all their great fear [they feel in their own countries], all their problems with their countries — but they are all waving their countries’ flags. What is that all about?”  And he went on to ask, “If they have such fear and such problems and they hate their countries, why do we see all the flags being waved — for Guatemala, for Honduras, for El Salvador? We are seeing these flags all over the place. Why are they waving those flags?”  And while Jerry may disagree, the president correctly reasoned, “This has nothing to do with asylum. This has to do with getting into our country illegally. And we have to know who wants to come into our country.”  I could not agree more.

These days I have pretty much of a zero interest in anything that Fox’s two resident phonies have to say.  Jerry has a rather long history of being little more than a publicity whore, and to this day I’ve never quite been able to figure out why it is exactly that he continues to be taken seriously as some sort of ‘journalist.’  From his ‘discovering’ Al Capone’s lost hideout in a cave in Chicago (which showed no evidence of his claim} to his posing as a self-proclaimed “war correspondent” in Iraq (which caused our military to have him removed from the country), he has had no credibility regardless of topic.  And Williams is nothing more than a stooge for the Democrat Party who spews nothing more than the talking points provided to him.

And who is it that flies the flag of a country they are willfully leaving?  They come here with hat in hand begging to be let into a country which doesn’t have any obligation to take them in.  About 29% of all Mexicans that come to our country actually go to work.  The rest decide its far better just to depend on various welfare programs.  That’s 71% costs millions and millions of dollars per year.  Once upon a time when immigrants came to America they had to show that they had a skill and could support themselves.  But not anymore.  Most of them don’t support themselves at all.  And most see life in America as a free ride. They have zero interest in becoming American, their only interest is in living off the rest of us.

Now I don’t know about any of you, but personally, I don’t want more uneducated people in the United States.  Heaven knows our public school system is doing a pretty good job of that already.  When you have uneducated parents that don’t value education, it becomes harder to educate.  And it only makes matters worse when you add to this illegal immigrants and their children who don’t even speak English.  The only people who want this country overrun with uneducated illegals are the Democrats and those businesses who want cheap labor.  We should deny any entry done illegally, demand that immigrants come with income to support themselves (no food stamps, no free health care, no free housing) and ONLY if they speak English.

And by the way, it’s according to the U.N. that of the 20 most violent countries in the world 16 of them are located in Latin America.  Honduras has the highest murder rate in the world.  Many of the border crashers are from Honduras and most of ‘them’ are young males, the most crime prone segment of any population.  And have ever noticed how it is that the loudest advocates for open borders are those like Jerry, and his fellow leftwing buddy Juan, who live in gated communities and therefore would never be forced to contend with illegals taking up residence in their neighborhoods?  But it’s the rest of us who can’t afford to do the same who are the ones who are said to be “to harsh” because we don’t want these illegals living next door.