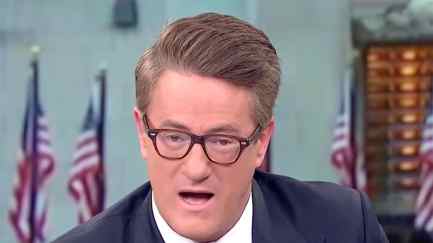 I just don’t understand how it is that those on the left think that they will convince me to see the sanity of their position on nearly every issue, or will somehow instill in me the ‘wisdom’ of voting for ANY Democrat by simply calling me names.  I’ve been called deplorable by Hitlery, a dreg of society by ‘Slow Joe’ Biden and now I’m being asked what kind a degenerate raised me to be the moron I am today.  A man who is obviously a racist if for no other reason than because I wish to prevent those coming into my country who are seeking nothing more than to live off the U.S taxpayer!

It was MSNBC “Morning Joe” co-host Joe Scarborough who, in once again choosing to attack those of us who are President Trump’s supporters, went so far as to question what it is that’s wrong with those of us who applaud his “lines that they know are lies.”  Scarborough said President Trump will tell an “obvious lie” and his supporters respond by cheering like he just delivered a “punch line” or scored a touchdown.  Really?  If we’re going to talk about someone who had a reputation for telling lies we need look no further than Barry ‘O’.  The same guy old Joe responded to by cheering.

It was in demonstrating just how much of an imbecile he truly is that Scarborough asked, “Who raised them? What church did they go to growing up? Do they still go to church every week? Do they go to church on Sundays and then Mondays they applaud somebody beating up the press for asking a question about healthcare reform? What do they tell their children at night about the type of character they want them to have?” Scarborough asked. “You see, you can’t cheer about somebody committing assault and battery and beating up somebody and throwing them to the ground.”

And if that weren’t enough, Joe went on to say, “You can’t cheer on lies that you know to be lies and then go home and try to teach your child anything. You just can’t. Because they will see that you are the hypocrite standing behind the president, cheering him on and laughing as he applauds assault and battery, as he lies about the most basic facts, as he tears to shreds one constitutional norm after another.”  Again I bring up all of the lies told by Barry, all of which I’m quite sure most reasonably intelligent Americans remember, and remember very well, as if it was just yesterday.

And even ‘IF’ President Trump were to do nothing but lie to us nonstop every single day he would still not be able to hold a candle to Joe’s hero, ex-president, Barry ‘O’, the same guy that Joe Schmo was cheering for.  Deep down he knows why we cheer our president, he has too.  But he just can’t get over how President Trump has been so successful.  Unlike Joe, my parents raised me to think for myself. They also taught me to detect BS from a mile away. There is nothing on the left that appeals to me. When your platform is murdering babies and open borders I just can’t get on board.

The Democrat and Republican elite, and their many media allies, have NEVER gotten over the fact that Trump was able to beat them.  Ninety percent of the news coverage of President Trump has been negative and yet they still haven’t managed to separate Trump from his supporters. They say more nasty things about Trump than they ever said about Barry.  Barry the guy who supported helping the BIGGEST sponsor of terrorism in the world, Iran, get nuclear weapons, and supported American Terrorist groups, Antifa, BLM, and foreign terrorist groups, Hezbolah and Hamas.

When you watch a President Trump rally, what you see is a crowd of normal American people.  When you watch a leftist march or demonstration all that you typically see is little more than a bizarre freakshow consisting of every manner of freak.  And it’s every time that I see one of these mob actions that the very first thing that crosses my mind is, “Who is it that raised them?”  I’m quite sure that their mommy and daddy are just oh so proud of them.  And you know, what further proof do we need that there are those in this country who simply should not be allowed to reproduce!