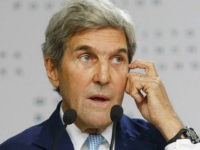 After years of having to tolerate this boob first as a U.S. Senator, then as pompous presidential candidate and then as someone who was, quite possibly, the worst secretary of state in this nation’s history, John Kerry-Heinz recently made it quite clear that he apparently won’t be going anywhere soon.  You see, it was just this past Sunday, during an interview on New York AM 970 radio’s “The Cats Roundtable,” that John Kerry-Heinz refused to rule out a potential 2020 presidential bid.  And all I have to say to that is, “Please run John, PLEASE!”  I really can’t think of anyone else who I would rather see as the Democrat standard bearer in 2020.

Kerry-Heinz told the host of this ‘program’, someone by the name of John Catsimatidis, that “I’m not ruling anything out, but I’m not sitting around, you know, actively laying the groundwork or making any plans.”  And he went on to say, “I think the focus of everybody right now should be on the election that’s going to take place in 33 days, 34 days — somewhere in there. We have an opportunity in the midterms to voice our dissatisfaction. We have a lot of good candidates around.”  Kerry-Heinz also discussed the current condition of Washington D.C., calling it “broken” and “in a bad place.”  And he should since he was a major player in ‘breaking it.’

Kerry-Heinz declared, “Washington is broken.”  Which was interesting to hear from him since he, as one of the major players in ‘The Swamp’, perpetrated much of the damage.  And he then went on to say, “Most Americans understand that. It’s a mess. The Congress is dysfunctional because it’s torn apart ideologically. Politically, it’s in a bad place. And it’s a sad thing. Because we need to be … making decisions faster. We need to be rebuilding our country.”  But what Kerry-Heinz is demanding is already being done, by President Trump.  It is he who has highlighted congressional dysfunction and those pulling the country in the wrong direction.

Look, it is in John Kerry-Heinz that we have a man who, quite literally, faked three Purple Hearts during what was a very brief, four month, tour of duty in Vietnam and who was able to leave the US Navy early.  And then it was as a reserve Naval Officer, and in clear violation of the Uniform Code of Military Justice (UMCJ), that he traveled to Paris and met privately with the NVA and the Viet Cong.  He returned to the United States parroting the communist party line about the war and testified before Congress comparing American soldiers to the hordes of Genghis Khan.  It was a clear case of treason as well as giving aid and comfort to the enemy in a time of war.

And Kerry-Heinz is living proof that once a traitor, ALWAYS a traitor.  Because it was while serving as Barry’s secretary of state, that he chose to again betray his own country by choosing to side with the Iranian “Death to America” Mullahs by providing to them that which they so desperately wanted, the green light to develop their own nuclear weapons along with billions of dollars that would be used to further support their terrorist activities.  And this is the man who thinks that the American people will forgive all his treasonous behavior and see fit to elect him as president?  He’s another Democrat who gives delusional a whole new meaning.

Not one Democrat, including Kerry-Heinz, who has been mentioned as a possible Trump opponent has an agenda that benefits all Americans.  I can’t wait until the election when all of these abolish ICE, open borders, raise taxes, lower tariffs, anti-America foreign policy Democrats have to face President Trump at the ballot box.  Come the next presidential election the question to be answered will be an easy one.  Are you better off today than you were 4 years ago?  Most potential Democrat candidates have left a long trail after either being part of Barry’s administration or Congress, so there is ample information regarding their position on the issues.

I put John Kerry-Heinz in the same category as ‘Hanoi Jane’ Fonda. He slapped his fellow Vietnam veterans in the face by accusing them of committing atrocities in Vietnam.  The American people must take advantage of every opportunity to get rid of ‘swamp’ creatures like Kerry-Heinz.  Every vote in every race should be looked at as being critical to the future of our country. We’ve allowed ourselves the luxury of being lazy. Now we are now one president and one congress away from losing our Republic.  Those who understand what socialism is, must impress the horror on all those you can because half the country has become zombies of the left.