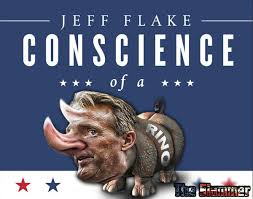 What would seem to be rather fitting is the fact that RINO Jeff Flake, you know him as the guy who, because of his hatred of President Trump saw as being yet another opportunity for him to stick his finger in the eye of our president, decided to side with the Senate Judiciary Committee Democrats on Friday by demanding that a seventh FBI investigation of Supreme Court nominee Brett Kavanaugh should be conducted, was born and raised in the small town of Snowflake, Arizona.  Think about it, can anything be seen as more fitting?

Snowflake, which is in the northern central part of Arizona, was founded in 1878 by early Mormon leaders Erastus Snow and William Jordan Flake, the latter of whom is the great-great grandfather of Jeff Flake.  Flake was born in Snowflake back on Dec. 31, 1962, and he was apparently reared on the family’s cattle ranch there.  And it’s the ‘Welcome to Snowflake, Arizona’ website that states:  “Visitors to Snowflake’s historic homes and tree-lined streets are captivated by its hometown charm and inspiring location.”

Flake served six terms in the U.S. House. He became a U.S. senator in 2013 after winning the seat held by retiring Sen. Jon Kyl.  Flake has been a staunch, and very vocal, critic of President Trump since before Mr. Trump was even elected.  So much so that he once compared President Trump to genocidal dictator Joseph Stalin.  And when in August 2017 a poll showed that only 18% of Arizonans approved of his job ‘performance’ it was in the following October that he announced he would not seek reelection to the Senate.

Now I don’t know what this latest FBI investigation will show, but I do know this: if this new background check finds anything significant, then we should probably start having a different federal agency doing background checks.  After all, if a guy who was apparently known by everyone at his high school to be a serial rapist, and can still pass six FBI background checks, then FBI background checks clearly aren’t worth the paper they are written on.  Which makes all of these accusations against Judge Kavanaugh all the more unbelievable.