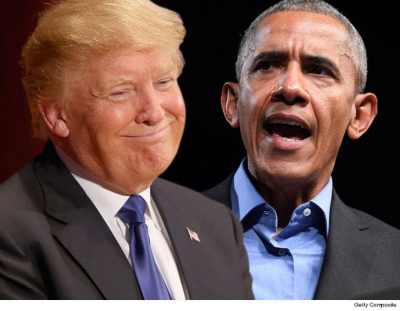 If you have been paying any amount of attention to the antics of those in the Democrat Party, as well as their many minions in the ‘fake news’ state-controlled media complex, you would have to come to the conclusion that, for the most part, they have now become completely unhinged.  And it would seem that with each passing day they become a bit more so.  It’s really quite the bizarre phenomenon, even for Democrats.  So how is it that we are to take them seriously?

It was for eight long years, and nearly on a daily basis, that we heard from Barry about what a terrible economy it was that he had inherited from George Bush.  And for those same eight years the socialist policies put in place by Barry did little more than to make our economic problems worse.  We were constantly being reminded about how some great economic recovery was underway and yet during Barry’s entire eight year reign economic growth only once got to a 2 percent annual growth rate.

And it was also during those eight long years that we had more folks out of the nation’s workforce than we did since the days of Jimmy Carter and wages actually decreased.  And we were told that what we were witnessing, economically speaking, was to be viewed as being the normal for our once vibrant economy.  That what we were seeing was going to be the best we’d ever get.  So in 2016 we had a choice to make, continue with the same failed policies, or to try something different.

And that something different has resulted in a true economic boom. Last month, for instance, the American economy added 201,000 jobs and the unemployment rate held steady at 3.9 percent.  Apparently, many of our so-called economists had forecast 191,100 new jobs and that the unemployment rate would be falling to 3.8 percent.  Now I’m not sure what it takes these days to be an economist, I can only hope that it’s at least a little more than what it takes to be called a ‘professor’.

Also last month, we saw average hourly earnings increase 2.9 percent for the month on an annualized basis, according to a Department of Labor report released Friday. That also beat expectations for 2.7 percent wage growth. In dollar terms, average hourly earnings increased 10 cents from the previous month to $27.16.  Private sector payrolls rose by 204,000. Mining added 6,000 new jobs. Construction added 23,000, bringing its total to over 300,000 for the year.

Now with all that being said, it was during a speech that Barry delivered earlier today at the University of Illinois which, oddly enough, gave him an award for “ethics in government” that Barry claimed it is he and not President Trump who deserves credit for the “economic miracle” Trump and Republicans are now touting. He said, “When you hear how great the economy’s doing right now, let’s just remember when this recovery started.”  Yes, the ‘real’ recovery started with President Trump!

As for Friday’s strong employment numbers Barry claimed, “Those job numbers are the same as they were in 2015 and 2016.”  Of course, the kernel of truth inside Barry’s claim is that the pace of job creation has been the same over the past several years.  But what he leaves out is that the economy is doing much better by several other measures as well, including the pace of growth, the rise in household income, and the increase in opportunities at the lower end of the spectrum.

Moreover, when Barry takes credit for the economic recovery, he ignores the fact that it was the slowest recovery in the post-war era, largely due to HIS policies. The recovery began in earnest when Republicans took over the House in 2010, and put an end to any prospect of more massive stimulus bills, or more heavy regulations like Obamacare.  Today, Barry blamed the Republicans’ victory in 2010 for the fact that he failed “to reverse 40-year trends” of inequality.  Actually, it just took Trump.

So in the big scheme of things I can’t help but wonder if there are today enough Americans, at least of those who vote, who would actually prefer a return to the days of Obama-style economic policies rather than to ensure that we stay the course on which the economic policies of President Trump have put us.  I suppose that’s something that we will come to find out in a mere 59 days.   There is much uncertainty surrounding the coming election, with choices that could not be clearer.

Barry ‘O’ once joked about the so-called “Magic Wand” in terms of being able to bring manufacturing jobs back to America.  And it’s that magic wand that appears to have taken the form of President Trump, a president who, at least as much as he can, enforces our immigration laws and thus puts upward pressure on real Americans’ wages.  Also, the tax cut and regulation cutting plays a role. Thank God for President Trump and the real “Magic Wand” along with cutting regulations and taxes.

Apparently a booming economy, at least when a Republican is in the White House, causes an extraordinary meltdown among Democrats.  And while Democrats, as a party, have nothing to offer other than hating our president, the country is in the best shape, economically speaking, than it has been in decades.  And because of that the ‘Democrat-Hate-America’ agenda has now been exposed and with it their hatred of America, of average Americans, of God and of American exceptionalism!!

All Barry succeeded in doing, with his self-promoting little speech, was to remind us all of how it was that he came to preside over what was the single largest collective wipeout of Democrat Party power in modern U.S. political history.  And he also reminded us of why we chose to vote for Donald Trump and not his chosen successor, Hitlery.  The speech was crafted out nothing more than lies, half-truths, lies by omission, distortions and straw men arguments. It never changes with this guy.

Those on the receiving of our current economic boom know full well that it is President Trump who’s responsible for what is a bona fide economic recovery, not something that was essentially nothing more than a ‘recovery’ in name only, which is what we experienced during Barry’s tenure in the White House.  Barry left America no better than it was when he found it, and he offers us only excuses for why.  And it has been in a brief 18 months that President Trump has already made it better.