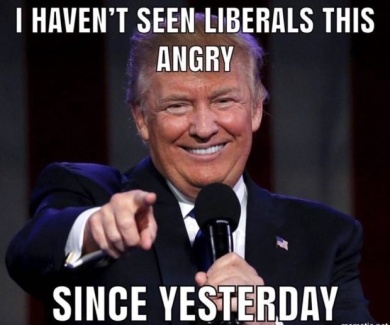 If you get your information from watching CNN, MSNBC, or any of the major purveyors of ‘fake news’, or choose to read such rags as the New York Time or the Washington Post you were probably very surprised, even shocked, to hear that the president’s approval rating is not in the single digits.  But as they say, truth is stranger than fiction because despite the continued, and constant, hyper-hysterics from the anti-Trump state-controlled ‘fake news’ media over the course of the last 18 months, including the meltdown after President Trump said kind words to Vlad Putin, President Trump’s approval rating has, oddly enough, continued to rise since May.

According to Rasmussen President Trump’s approval rating now sits at 50%. And as difficult as it may be for his many devoted followers to accept, it was Barry ‘O’ who had an approval rating of 45% at the same point in his first term.  So President Trump is now 5 points ahead of where Barry was at a similar point in his presidency. But they’ll likely try to make the claim that it’s only because Barry was black, because with the left it must ALWAYS be about race.  Because they simply cannot bring themselves to admit that Barry did an absolutely horrendous job as president, and for the most part Trump has done much of what he promised to do if elected.

But as we all should know, if there is one constant in this ever-changing world of ours, it’s that you can always trust polls to be more than just a little unreliable. And this poll is likely wrong as well.  Because I’d be willing to wager that President Trump’s true approval rating is very likely much closer to being 60%.  After all, his approval rating among blacks and Hispanics has been reported as being much higher though most will never publicly, or even privately, tell their friends, coworkers or pollsters how they really feel towards President Trump or whether or not they intend to vote for Trump, or the Republicans, once they enter the voting booth.

Barry ‘O’ got what was 24/7 praise from his buddies in the ‘fake news’ world, as well as from his many friends in the entertainment world, numerous foreign liberals, academia, etc., while they have been relentless in their attacks on President Trump.  And yet this president still polls higher than did Barry, even taking into account how polls were likely very heavily tilted in Barry’s favor. If all things were equal, Barry would have polled 5% approval and Trump 95%.  After 8 miserable years of a Democrat administration working tirelessly to undermine the country, we now have a president who truly does love this country. The contrast could not be more stark.

As we all know, Barry came into office with a stated mission to “fundamentally transform” America.  Donald Trump came into office with the promise to “Make America Great Again.”  And much of the progress made by Barry toward completing his ‘mission’ has now been successfully erased by President Trump simply keeping his promises.  What’s amazing to me is how both the media and politicians still believe that polls are accurate in Democrats’ favor. Rasmussen is probably closest to Trump’s actual approval rating, but I wouldn’t be surprised if it is actually higher. The same goes for the generic GOP/Democrat ballot polls for this year’s mid-terms.

Now regarding this November’s midterm election, while I have no doubt that liberals may very well be motivated to get out to the polls, they only comprise 20% of the American electorate (Gallup) and are pooled in just a few states. People who self-identify as conservative compose 36% of the electorate (again, Gallup) and are the core of President Trump’s supporters. Even if all 20% of liberals vote in the mid-terms, Trump only needs a portion of his base to come out. While I know there has been much talk about a ‘blue wave’ this fall that will sweep Democrats into power, I can’t help but think that it’s little more than wishful thinking on the part of Democrats.

I think it’s pretty safe to say that those on the left hate President Trump for no other reason than because he’s lowering unemployment, increasing the GDP, getting companies to come back to America and creating future jobs, reducing the national debt, gaining American respect around the world, making America safe again.  In other words, everything the Democrats hate because Democrats despise individual freedom and need a lousy economy, which they got from Barry making it easier for them to encourage more Americans onto the government teat.  Remember that great Marxist philosopher Obama once said negative growth is the new norm.

So my fellow Americans, do you want our booming economy to continue? Do you want greater border security? Do you want a president who seems determined to put Americans first?  Then work as hard as you can from now until November to get out the Republican vote.  And the same goes for 2020.  Trump will likely go down as being one of the greatest presidents in history while Barry has already been identified by many as being one of the worst!  Trump has endured more sick attacks from the ‘fake news’ media than any other president in history. He has also endured attacks by those from within his own party, those we refer to as RINOs.

One of the greatest things to come from the president’s rising approval numbers is the unintended consequence of having nudged many of those on the unhinged left ever closer to the edge of the cliff.  Make no mistake, these left wing radicals will continue their campaign of violence against President Trump’s supporters while CNN stooge Jim Acosta and the NYT all snivel that the president’s legitimate criticism of the ‘fake news’ media encourages violence against faux journalists, of which there has been none to date.  These same ‘journalists’ have been accomplices in what has been numerous, well-documented, and quite violent, attacks against Trump supporters.