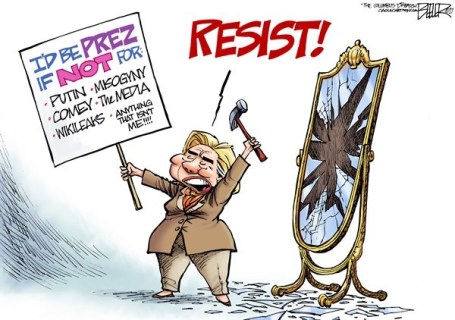 So here we are nearly 17 months after the last presidential election and still the Hitlery Clinton ‘Blame Express’ continues to roll on down the highway showing no signs of running out of gas any time soon.  It was just this past Tuesday that Hitlery was found speaking to an organization who just so happens to be under investigation for gender discrimination, as she continued to lay all manner of blame on any number of people who she sees as being responsible for her embarrassing loss.  And nowhere on her list does it mention the fact that she herself is the ONLY reason she lost.

‘The Wing’ is currently under investigation by the New York City Commission on Human Rights for not allowing men into their “co-working space and social club.”  Wing co-founder Audrey Gelman and podcast co-host Aminatou Sow asked Hitlery questions in front of an audience at ‘The Wing SoHo’ that was live-streamed to the group’s website. The mood was extremely supportive of Hitlery and critical of the current presidential administration, as the two hosts lobbed softball questions at Hitlery, who spent much of her time listing those she blames for her 2016 defeat.

Asked whether the #MeToo movement would have happened by now if she had been elected, Hitlery said yes and claimed that her loss accelerated the wave that was already coming.  She then lamented how hard it is to watch Donald Trump be President, but that she admires the “resistance.”  Hitlery talked about trying to keep herself aligned with what will make a difference, the midterm elections, a “political action that reigns in this administration.” She said without that, you haven’t “seen the bottom yet.”  Yet had she been elected we would have gone through the bottom.

Hitlery said, “You can march from now til doomsday, but if you don’t elect people who agree with you, and defeat people who don’t, nothing will change.”  But isn’t that exactly what we ‘Deplorables’ who voted for Trump did?  We chose to elect the guy who essentially agreed with us on most of the issues and to defeat the woman, not because she was a woman but, because she was someone with whom we agreed on virtually nothing.  And the sooner the old girl comes to grips with that little fact the better off everyone is going to be, including her own beloved Democrat Party.

Hitlery also took the opportunity to paint the Electoral College as outdated, saying that it “does an injustice to the idea of one person one vote,” pointing to it as a “part of the slavery compromise back in the day where small states with much less population than big states … would be able to have their votes counted in a much more impactful way than if it were just a popular election.”  She then suggested support for work to “change the directions that electors are given,” to vote for the person who got the most votes in the country instead of the most votes in their state.

And of course Hitlery also blamed the Access Hollywood tape news for overtaking media coverage of the CIA director and Director of National Intelligence, on October 7, stating that Russia was interfering in the 2016 election.  She blamed WikiLeaks leaking DNC emails for further dominating media coverage instead of the Russia interference and she even brought up the Pizza-gate ‘scandal’ which she used as a way of transitioning into talking about how Trump continually brought up WikiLeaks on the campaign trail, skewing the information there into “bizarre interpretations.”

She repeatedly commented that it was generally accepted that she was going to win and that that did complicate things.  She said the press didn’t know how to cover the election and reverted to criticizing her, and that people must demand that the press “check their sexism and their misogyny” in their treatment of those running for office.  Gleman asked Hitlery what her legacy will be and Hitlery pointed to her 1995 “transformational” Beijing speech on women’s rights as her public, political life legacy and being the first woman nominated by a major party for President.

She said sometimes the struggle gets to be too much, that “there’s still so much in society that just batters you,” and that she hopes that women will be supported in places like the Wing. She said she hoped that her “persistence” and “resilience” will “give people the courage to keep going.” She called it the “best form of revenge by making it clear you are not going to be stopped, you’re not going to be disrespected, you’re not going to be undermined, you’re gonna be who you intend to be, and if that’s some small part of my legacy, then I will be very, very happy and grateful.”

Hitlery will be remembered as the presidential candidate who everyone thought was unbeatable because she was running against a person who those in the media and in Hollyweird simply laughed at from the time he announced he was running.  Then she got trounced in the Electoral College that she now criticizes as being outdated.  And while she should be indicted for her many crimes, and breaches of our national security, she won’t be.  And she will be remembered for being nothing more than a failed power-hungry megalomaniac that people were too smart to elect as president.

Personally I’d be glad if all of the madness simply came to an end with Hitlery finally accepting the fact that there was no grand conspiracy that prevented her from obtaining that which she thought she so richly deserved.  Barry ‘O’ spent his entire eight years in office blaming Bush for all that went wrong on his watch, so is this now what we can expect from Hitlery for the next two, or possibly six, years?  Are we going to be forced to listen to how it was that she was somehow robbed of her rightful place as first female president of the Unite States?  If so, just shoot me now!

The truth is that Hitlery, just like millions of other folks, was convinced that there was absolutely no way she could possibly lose to Trump, and yet she did.  Her plan was to play it safe, to keep a low profile and to simply coast to a win, which, in looking back, was obviously the wrong strategy.  And now I can only assume that her loss was such a traumatic event for her that it must have caused something within her to simply snap.  Thus, practically since election night, we’ve been subjected to what has become nothing more than a growing laundry list of excuses for why she lost.