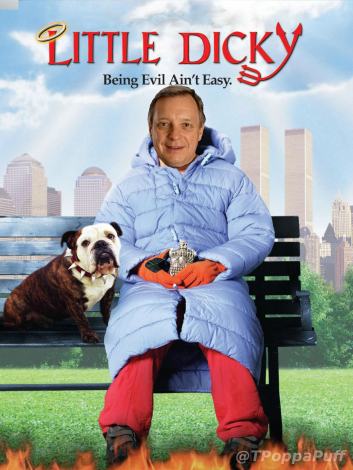 I always get hit with a wave of nausea whenever I hear some scumbag Democrat working so hard to convince pretty much anyone who will listen that it’s those evil Republicans who must always be watched ever so closely because it’s they who are guilty of behaving like their favorite third world depot.  It’s never the Democrats that anyone needs to be worried about because, as everyone should know, they are as pure as the wind-driven snow and possess only the very best of intentions.

For instance, it was during this past weekend’s less than thrilling episode of “Fox News Sunday,” with that less than impressive, and obviously left-leaning, host Chris Wallace, that we heard ‘Little Dick’ Durbin claim that President Donald Trump’s personal lawyer John Dowd’s suggesting special counsel Robert Muller’s probe should end in light of the ouster of FBI Director Andrew McCabe was part of a pattern of “desperate and reckless conduct to intimidate” law enforcement.

‘Little Dick’ said, “If the president reaches out and stops this investigation, that is a constitutional crisis in this country. That’s been said by Democrats and Republicans alike. What it means is: It would be incumbent on Congress on a bipartisan basis to use the tools at its disposal.”  Nowhere at all does ‘Little Dick’ mention the level of intimidation of law enforcement that occurred during the entire eight years that Barry ‘O’ was in office.  The level of hypocrisy taking place here boggles the mind.

Anyway, ‘Little Dick went on to say, “There are two bills before the Senate Judiciary Committee — which has been absent without leave on this issue — two bills before the committee, bipartisan bills to protect the special counsel.”  And he went on to add, “We should pass those bills now. This president is engaged in desperate and reckless conduct to intimidate his law enforcement agencies of this country and to try and stop the special counsel. That is unacceptable in a democracy.”

I guess ‘Little Dick’ thinks we’ve all forgotten the “desperate and reckless conduct to intimidate” law enforcement that occurred during the Barry ‘O’ administration.  Let’s face it, you’d have to be blind not to recognize how much time was spent by Barry in his effort to portray police officers as being nothing more than a bunch of trigger happy, out of control racists just waiting for their next opportunity to shoot an unarmed black guy.  Yet ‘Little Dick’ remains, one of Barry’s most ardent defenders.

Never have I witnessed such a concerted effort to undermine a duly elected president for doing nothing more than keeping those promises he made when running for election.  And ‘The Swamp’ is now pulling out all the stops in its effort to effectively take down this president.  And what’s now being undertaken involves those on both sides of the Isle.  We don’t have two parties, just controlled opposition. The President is doing what he can, but he is seriously hamstrung without support.

And ‘Little Dick’ is guilty of his own “desperate and reckless conduct to intimidate” law enforcement, as he himself has often referred to the police as being Stormtroopers and, that old Democrat favorite, Nazis.  None of us must ever allow ourselves to ignore the fact that it is the Democrat Party that represents the gravest threat that we face as a nation and it consists of those who are a very clear and present danger to our Constitutional Republic and American way of life.

And should not the fact that ‘Little Dick’ continues to claim that the most important thing his party can do is to stand tall and fight for those in this country illegally, and do whatever it takes, including shutting down the government, to make sure that these illegals get more favoritism, more special treatment, and more opportunities than those who came to America legally get, or even more than the legal U.S. citizens get, be considered as conduct that is both “desperate and reckless?”

It is neither desperate nor is it reckless to call out a law enforcement agency that became so corrupt under its former Director as to become totally dysfunctional.  Those involved deliberately put their desire to bring down a duly elected president over the reputation of their agency.  Conspiring to overthrow the government of the United States because you don’t agree with the people’s choice must surely be a treasonous act.  Comey and his FBI cabal must be outed and brought to justice.

‘Little Dick’ is one of the most polished liars in a city that overflows with them. “Desperate and reckless conduct?”  Does he mean a politicized and weaponized intelligence community taking sides in a presidential election, paying millions of dollars for a political, and blatantly fictitious, smear document, then having his friends at the FBI sell it to a FISA court as if it was legitimate intelligence, then leaking all of it to any number of those in the state-controlled news media?

That must be what ‘Little Dick’ means by “desperate and reckless conduct.” And when the duly elected President (the only clean player in the entire episode) dares to defend himself, the blame is all put on him?  The effort to remove our president will continue by those in ‘The Swamp’, using as their model for doing so your typical third world banana republic. Those who voted for him, regardless of our party affiliation, must remain behind him, to do otherwise would be to allow ‘The Swamp’ to win.