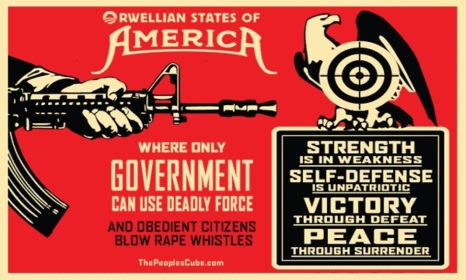 More often than not it’s typically a Democrat who will look you in the eye and tell you that it’s not YOUR gun that they’re wanting to take away.  But we’ve always had that little voice in the back of our mind telling us that that is all a bunch of bullshit!  And now comes a recent poll conducted by YouGov that supports what that little voice has been warning us about, well, forever.  Because it shows that Democrats largely favor taking away all guns, not just the ‘scary-looking’ ones.

In this particular survey, respondents across the political spectrum — Democrat, Republican, and Independent — were asked to show their favorability of banning semiautomatic weapons.  As was noted by HotAir in its coverage, the question was the all-inclusive “weapons,” not semiautomatic “assault rifles.”  Those answering might’ve thought this meant the latter but “weapons” would be inclusive of handguns, technically speaking.  Here are the results:

It should come as little or no surprise that is was 82 percent of Democrats who said that they favor banning “semiautomatic weapons,” with only 13 percent saying that they oppose such a move.  But what was most surprisingly is the fact that 25 percent of Republicans, or those who claimed to Republicans for the purpose of this poll, “strongly favor” banning them and 12 percent “somewhat” favor a ban.  Independents appeared to be a bit more evenly split.

The next question asked about banning all handguns, which wasn’t popular among Republicans or Independents. But Democrats seem to like the idea very much.  As you can see it was 44 percent of Democrats who said that they would be in favor of banning all handguns, proof, I guess you could say, that the party ultimately wants only the police and military to have weapons.  Now criminals will have them too, but not to worry, the police are just minutes away, right?

But even more worrisome is the question about repealing the Second Amendment, which actually sounds fantastic to 39 percent of the Democrats respondents to this poll.  All political categories strongly favored requiring mental health evaluations for gun purchases, which I too am in favor of, but what’s a stickler for me in that regard is how exactly “mental illness” might be defined.  And knowing Democrats as we all do, I worry that the definition would likely be quite broad.

A statement from YouGov said, “A majority of the public consistently has supported many gun control proposals: just over half in last week’s Economist/YouGov Polls say they want stricter gun laws in general,”  And they went on to say, “But support has not grown beyond that – until now. In the latest Economist/YouGov Poll, 61 percent say there should be stricter gun laws, up eight points in the last week.”  Likely because of the steady stream of anti-gun drivel from the media.

And when it comes to stricter gun laws and even repealing the Second Amendment, it seems that the youth of America are screaming louder than the adults who, sadly, know better.  And unfortunately, it seems to be working.  But should we really be all that surprised knowing as we do that our children stopped learning pretty much anything about our Constitution decades ago.  And these days it’s far more important to ‘teach’ them about ‘white privilege’ and how gay sex is ‘normal.’

It’s the gun control/confiscation elites who all live in gated communities/buildings with security that’s armed with GUNS.  They send their kids to private schools with resource officers who are again is armed with GUNS, and who would not be found cowering behind a car while children were dying inside.  And they work in buildings that also have guards armed with GUNS.  Meanwhile we little people must contend with in gun free zones and run the risk of being shot by some crazy.

Perhaps if schools were to start teaching history classes again, and not just American history, but the true history of Communism and Socialism as well, kids would have a greater respect for the rights they have and why it is that they have them. We fought wars to stop the spread of communism and then let it fester in our schools until they brainwashed all of our children into hating America, hating capitalism, hating freedom, and putting all their faith in an all-powerful government.

Take a good look at most of the people who vote Democrat. The Founding Fathers themselves would have banned their possession of weapons.  I strongly suspect that 80 percent of Democrats couldn’t tell you the difference between a semi-automatic rifle and a bazooka.  Liberal intolerance and demands do not require facts to be fully supported in our upside down society.  The left, which now controls the Democrat Party, demonizes ANYONE who dares to disagree with them.

And despite the denials of many anti-gun folks, banning has to mean confiscation. There’s no point in only preventing future firearm sales if there are 300 million firearms already in America.  We don’t need more gun laws.  All we need to do, just as in the case of our immigration laws, is to enforce the many laws already on the books.  It’s that regard that we need a lot less Democrats, as well as fewer RINOs, in Congress and we must keep that in mind come this November!

And finally, any doubt of the Democrat Party’s total lack of loyalty to America and its complete lack of patriotism was dispelled with this survey.  And anyone foolish enough to believe they will stop once they get done with the Second Amendment is dangerously naive.  The goal of the Democrat Party today is nothing short of complete dismantling of the Bill of Rights and trashing of the Constitution. These people have utter contempt for the Constitution and anyone who believes in it.

One response to “THE TRUTH ABOUT DEMOCRATS AND GUN CONTROL…”