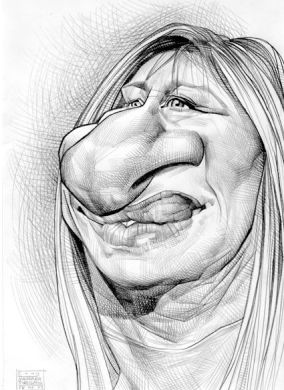 And so it would seem that we have yet another of those kooky leftwing Hollyweird types who have gotten their panties in a bunch over the recently-signed tax reform law.  This time around it’s none other than Barbra Streisand, that well-known advocate for the little people (NOT) who has now chosen to weigh in on tax reform, explaining that she believes the Republican-led effort was deliberately set up to harm blue states, athletes, Hollyweird, AND, according to Babs, the middle class.

Old Babs, our 75-year-old washed-up has-been is a rather frequent critic of President Trump, and has blasted the “erratic and disruptive” members of his administration and did so yet again on Thursday via her Twitter account.  She wrote, “I don’t think it’s a coincidence that blue states, athletes, actors, writers, producers, and directors will be punished by this scam of a tax bill, where billionaires get billions, and the middle class gets bupkis (practically nothing) – and an eventual tax increase.”

She also slammed the administration for what she called its “abuse of power, the vindictiveness, and the outright lies.”  Babs, who once had hinted she would be retiring from touring, appeared and sang at fundraisers for ex-Democrat presidential candidate Hitley during the 2016 race and has frequently criticized Trump in media appearances and social media since the election.  She also suggested during the 2016 campaign that she would move to Australia or Canada if Trump won.

The truth is these leftwing “artists” have always resented the fact that the industrial machine produces products that most people want and/or need, and is therefore more successful.  Artists, on the other hand, often have supposed “talents” that many people don’t recognize or enjoy, and therefore they tend to “starve” more than do other groups. One of the reasons they love welfare and handouts is because so many of these so-called “artists” need the money – especially if they never get a “day job.”

Ironically, it’s the industrial machine that ends up feeding these starving artists, because what ‘fans’ there are tend to get THEIR hard earned money from the machine, which they in turn then spend on these “artists.”  Babs has always had the option to pay more taxes and I’m quite sure not one bleeding heart liberal has ever chipped in to pay more or for that matter I’m sure none of them have ever given to organizations which go to the farthest parts of the Earth to help the poor.

And Babs, just wait until California implements a wealth tax, because it’s coming, as more wealth producers leave the state.  All of the illegals you and your friends want aren’t coming close to generating the tax base that the state is losing.  And this new law will entice thousands more to move.  And who in their right mind would want to move to California, home of the highest income taxes in the country, the highest gas taxes and gas prices, the highest utility rates and off the chart toll road prices.

And then you also throw into the mix, all thanks to Obummer’s leftist HUD policies, the extremely high density high-rises building that are bringing in more low income individuals which in turn impact both schools and traffic.  And let’s not forget the worst homeless problem in the country.  The illegals get housing assistance, food stamps, healthcare and schools, while our CITIZENS, the vets, the elderly, the less fortunate, get NOTHING.  And there you have the utopia created by the left.

Folks like Babs have wielded far too much influence, for far too long, and to the detriment of the working class. I think it’s great that these people may finally get a taste of their own medicine.  Now they will have to seek recourse by reforming the tax code of the state of California.  It will be a beautiful sight to watch the illegals, sexual deviants, government workers, welfare mooches and the entertainment industry duke it out with each other over whose benefits will get cut.

And you know, the Red states have had to carry the burden of Blue states for years, even decades.  And quite frankly, we’re tired of it.  Time for those in the high taxed Blue states to carry your own load, or to decide that the burden is too much and lighten it up some.  Maybe if some of these Hollyweird ‘celebrities’ would contribute money instead of just their voices to causes something would get done so that tax money doesn’t have to foot the bill for all of their idiotic little pet projects.

And a note to illegals and the homeless: Malibu is a beautiful place to settle in and Bab’s has a beautiful home overlooking the pacific coast. I am sure her socially conscious intent was/is to accept you all into her beautiful home and community. She will happily pay more in taxes to support you and your family. She will gladly let you set up your tent near her garden, just because she cares so much for the less fortunate. Right Babs?  Likely not as she is one of the biggest hypocrites around.

You know, I suppose there are lots of folks out there who still choose to purchase movie tickets or concert ticket regardless of knowing the political leanings of those who they go to watch or listen to.  But for me I refuse.  Why would I choose to subsidize what I view as being the bad behavior of these pompous assholes whose sole purpose in life seems to be the total and complete destruction of the country I love?  They get none of my hard-earned money and frankly, they never will.