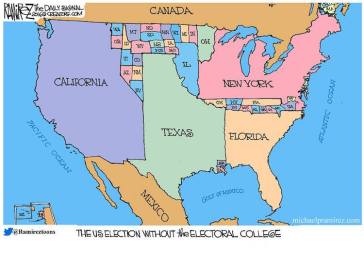 What it is about those in charge of the Democrat Party and a lack of possessing even a most rudimentary understanding of our Constitution?  I mean do they really not understand what it says, or is there something a bit more sinister underway here?  For instance, do they truly possess no understanding of it, or are they simply betting on the fact that those who tend to vote for Democrats don’t understand it or even know what it is.  Personally, I’m thinking that those in charge of the party have a pretty good grasp on what it is that our Constitution says, and they’re pretty confident that the vast majority of those who proudly vote for Democrats haven’t got a clue.  And that’s how those in charge prefer it.

Which brings me to another example of where we have a high ranking member in the Democrat Party attempting to take advantage of that significant ignorance regarding our Constitution.  Now I’m sure most of us are aware that genuine American History is very rarely taught in our public schools today.  And dare I say that there is a specific reason for this.  Because if the true history of our nation was actually taught then it would be common knowledge that the Electoral College has a purpose and was established by our Founding Fathers, in the Constitution, as a compromise between election of the President by a vote in Congress and election of the President by a popular vote of qualified citizens.

Frankly, I can’t remember another time in my sixty five years of being on this planet where I’ve ever seen such a dedicated and concerted effort by those in the Democrat Party to convince their followers that the Electoral College is nothing more than something dreamt to somehow rig the system against them.  The most recent attempt came from none other than Democratic National Committee chairman Tom Perez who falsely claimed, yet again, that the Electoral College is not “a creation of the Constitution.”  During a lecture at Indiana University Law School, Perez said the Electoral College “doesn’t have to be there,” asserting that the national popular vote should be the principal standard.

And it was in lying through his teeth that Perez said, “The Electoral College is not a creation of the Constitution. It doesn’t have to be there.”  And he went on to say, “There’s a national popular vote compact in which a number of states have passed a bill that says we will allocate our vote, our electoral votes, to the person who wins the national popular vote once other states totaling 270 electoral votes do the same.”  You know, it’s the fact that he knows he’s lying is what makes his actions all the more disgusting and, dare I say, even more than just a little sinister.  But this is the type of behavior that we have now come to expect from those in charge of the Democrat Party and others one the left.

Perez’s claim that the U.S. Constitution is not a part of the Electoral College is, however, completely false and he knows it.  Because he knows as well as the rest of us that Article II clearly outlines the electoral process, dictating that states must appoint electors who meet and vote for the president.  Article II very clearly states, “Each State shall appoint, in such Manner as the Legislature thereof may direct, a Number of Electors, equal to the whole Number of Senators and Representatives to which the State may be entitled in the Congress: but no Senator or Representative, or Person holding an Office of Trust or Profit under the United States, shall be appointed an Elector.”  Pretty cut and dry.

Perez has made statements in the past implying that that President Donald Trump actually “didn’t win” the 2016 presidential election because Hiterly won the popular vote.  That’s just one of the many reasons that I have such a difficult time taking anyone in the Democrat Party seriously.  Because they’re nothing but a pack of unprincipled liars.  You can’t tell me that Perez actually believes any of the shit that is constantly coming out of his mouth.  And yet he’s hoping that those to whom he is speaking, will.  And it’s obvious that many of them do, which only encourages losers like Perez to spew even more of their rather toxic and blatantly incendiary rhetoric adding to our era of political incivility.

Look, the Founding Fathers created the Constitution, which was then approved by the people, and it’s the Constitution that makes very clear the purpose of the Electoral College and the role state legislatures play in shaping it.  Where Perez practices to deceive is when he pretends not to know that every election we have ever had has been won by the candidate with the most Electoral College votes, regardless of popular vote.  Hitlery lost in the very same fashion as has every presidential election loser that came before her, and Trump won the election in the very same way that every other presidential candidate won.  If Perez wants to change the way candidates win the presidency, there’s a process.

Nothing known to us thus far would change how the outcome of the last election was arrived at, Donald J. Trump is the constitutionally elected president of these United States.  And it’s only those afflicted with Trump Acceptance Resistance Disorder, or (TARD), which apparently includes Perez, who refuse to accept that fact.  For those unfamiliar, TARD is a pattern of pathologically dissociative and psychotic behavior, first observed in the late hours of November 8, 2016, and seems only to have increased in severity ever since.  Those afflicted with TARD often exhibit a rather pronounced cognitive dissonance, sudden bouts of rage, uncontrollable crying, suicidal ideation, and extreme butt-hurt.

Typically, those diagnosed with TARD are characterized by the possessing of a persistent unwillingness to accept that Donald Trump is going to “Make America Great Again,” and an overwhelming need to say just about anything in an effort to undermine, discredit or delegitimize our duly elected president.  Individual sufferers can be expected to display signs of paranoia and delusion; and in acute cases psychotic episodes have been observed.  Those afflicted go beyond being simply upset about the results of the 2016 presidential election, it’s those afflicted with TARD who are either completely unwilling or unable to accept reality, and very stubbornly so, despite irrefutable evidence.

And when it comes to those afflicted with this condition, the only known treatment that can be said to be in any way effective is regular exposure to some sort of psychiatric therapy.  The patient must be repeatedly exposed to heavy doses of political reality, and should be made to wear a “Make America Great Again” hat for as long as they are able to tolerate it, with each exposure increasing in length.  And it should be after no less than a week that the patient should be encouraged to be seen in public wearing the ‘MAGA’ hat.  And ultimately, the goal should be to get the patient to where they are comfortable wearing the ‘MAGA’ hat 24/7 without experiencing any outbursts of ‘NeverTrumpisms.’

Be aware that patients with TARD are typically very resistant to any form of treatment, and should always be considered as being rather dangerous whenever they are present in large groups (usually any number over 5).  Any possibility of treatment requires that they be separated from their hive-mind support apparatus since they cannot begin the process of accepting reality in the presence of encouragement towards delusion and irrationality.  Separation may require the assistance of law enforcement.  And if you have a friend or loved one who is suffering from TARD, urge them to seek treatment.  We must help those who can’t help themselves, and together we can beat this scourge, TARD.

But seriously folks, all joking aside, I can’t help but wonder just how many people actually understand all of the unintended consequences that would go along with the Electoral College being made to go away.  Now granted, the Democrats’ wish to scrap it notwithstanding, we’re still a very long way from abolishing it, courtesy of a Constitutional amendment.  But people need to be made to realize that if that were to ever happen the nation would essentially end up being run by little more than a hand full of states, all of which are of the very deepest shade of blue.  And why should the folks of, say, Nebraska be left to have what would essentially be no say in who it is that would be elected president?

Or to put it in such a way that even those in the Democrat Party can understand, there are 3,141 counties in America.  Donald Trump won 3,084 of them and Hitlery won only 57.  It would be ludicrous to suggest that the vote of those who encompass a mere 57 counties should dictate the outcome of a national election.  And yet we still have to listen to morons like Perez who continue to harp on the fact that because Hitlery won the popular vote, it’s she who should now be our president.  Why should I, as one who lives in one of those 3,084 countries that Trump won be forced to live in a country shaped by those who live in the 57 counties that Hitlery won?  Come on people, this ain’t rocket science.

2 responses to “WHEN DEMOCRATS PRACTICE TO DECEIVE…”