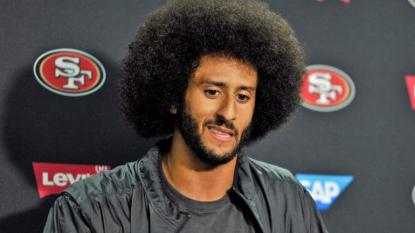 If one were to actually take the time to look up the word ‘loser’ in the dictionary, what one would likely find there as being the perfect definition is a picture of anthem-protesting 49er Colin Kaepernick.  And does anyone seriously think that if this pathetic dirtbag was a white guy, he would be allowed to continually get away with this kind of crap?  And it’s my personal opinion that his main purpose for behaving is such a despicable manner likely has more to do with the fact that he’s a shitty quarterback.  Or maybe I’m completely wrong about the whole thing and this really is all about some perceived racial injustice, and this boob taking it upon himself to stand up for all those he views as being persecuted.  All I know is this shitbag is lucky that I’m not the owner of the team.

Anyway, it was this past Wednesday when this dweeb spoke with those in the media in advance of San Francisco’s game against the Miami Dolphins whick will take place at Hard Rock Stadium in Miami on Sunday.  Instead of the customary media conference call, this one turned into a heated political debate. Things grew testy between Kaepernick and a particular media member of Cuban descent, in regards to Kaepernick’s past wearing of a Fidel Castro t-shirt.  According to the Palm Beach Post, “When pressed about the shirt, Kaepernick first pointed out that Malcolm X also was pictured.  Kaepernick said he supports Malcolm X and his willingness to be “open-minded” before forming his own views of the world.  Part of that open-mindedness, he said, was meeting with the Cuban leader.”

The Miami Herald reporter pressed Kaepernick about Castro which prompted him to respond by saying, “I’m not talking about Fidel Castro and his oppression. I’m talking about Malcolm X and what he’s done for people.”  I am a little curious though, when it comes to what this imbecile might actually know about Malcolm X or about the civil rights movement in general.  I mean he doesn’t really come across as being all that familiar with what went on during that period but certainly seems to feel entitled when it comes to everything that was accomplished by all those who took part in that struggle.  But when it comes to being measured by the content of one’s character Kaepernick makes it very obvious that he is an individual who possess an anemic amount of personal character.

The reporter confronted Kaepernick after the quarterback did his best to steer the conversation away from the rather “uncomfortable” topic of Castro.  Kaepernick shot back, “One thing that Fidel Castro did do is they have the highest literacy rate because they invest more in their education system than they do in their prison system, which we do not do here, even though we’re fully capable of doing that.”  So, I guess the fact that there are a rather significant number of political prisoners in Cuba is nowhere near as important to this moron as is the literacy rate?   Suppose this goof was in Cuba and speaking out against that regime, where does he think he’d be likely to end up, and in pretty short order?  That kind of stuff never even occurs to mentally challenged morons like Kaepernick.

And when a reporter chose to challenge Kaepernick on Castro’s own history of breaking up families, Kaepernick responded, “We do break up families here. That’s what mass incarceration is. That was the foundation of slavery so our country has been based on that as well as the genocide of Native Americans.”  I guess I have difficult time understanding why it is that anyone with even an ounce of commonsense bothers to gives this douche bag anymore than the time of day.  Perhaps if we simply chose to ignore him, and his blatantly sophomoric behavior, he’d grow tired of it.  And, again, if it was me who was in charge of this team, he would have gotten one warning about his behavior, and if he persisted he would have been either traded or cut and sent packing to be someone else’s problem.

And then after the South Florida media cited a Sports Illustrated study which said that many fans have stopped watching the NFL because of Kaepernick’s anthem antics, he responded by simply blaming the fans.  He said, “They’re not watching football because of my stance about fighting systematic oppression and wanting the same equality and freedom for all people.”  And he added, “I would say they probably need to look in the mirror at what they value. You know, if they’re OK with people being treated unfairly, being abused, being harassed, being terrorized, then the problem is more with what they’re doing in their lives than it is about watching football games.”  Maybe this guy has taken a few too many hits to his old noggin.  He certainly doesn’t come across as being all that bright.

And while the NFL remains perfectly unwilling to stop Kaepernick’s anthem protest, by insulting huge swaths of the its fan base and suggesting that by disagreeing with his protest that it somehow makes it appear as if they agree with the harassing and terrorizing of innocent people, Kaepernick’s conduct on this phone call crosses a line that’s not protected by free speech, or any right to protest.  The NFL has a recent precedent of cracking down on players whom they believe engage in conduct insulting or offensive to people at large, or certain groups in particular. In fact, the NFL exercised that power in Miami when they suspended and fined then-Dolphins safety Don Jones for tweeting “OMG” and “horrible” after Michael Sam kissed his boyfriend on live television during the 2014 NFL Draft.

Now if the NFL can use that kind of disciplinary action against a player for, in their opinion, offending the relatively small gay community, then it can certainly exercise that same discipline against Kaepernick for his insanely-offensive rant against far larger segments of their fan base.  Again, there’s no reason to believe the league will do that. But they could if they were so inclined.  So fans of the game are left with only one way to demonstrate their dissatisfaction.  And they do that by choosing to no longer watch.  Now I know there are plenty of folks to will put tuning in to watch their favorite team above tuning out in favor of their country.  But I’m not one of those folks.  Overpaid punks like Kaepernick can feel free to make their statement, but they shouldn’t expect me to watch.

You know, in a way it’s kinda sad that the NFL continues to tolerate this piece of trash as sees absolutely nothing wrong with not only embarrassing our country, but disrespecting our flag as well as all those who paid the ultimate price in defending this country.  As it is all he does is to come across as being nothing more than an American hater.  And in so doing the NFL essentially makes itself appear just as pathetic as he is.  And yet those in charge stubbornly refuse to chastise in any meaningful way the behavior of this clown, as well as all of the clowns that have decided to join him in his rather juvenile behavior, and continue to claim that it has nothing to do with the decrease in ratings that the NFL continues to experience for the first time in its history.

When you get right down to it, it’s difficult to see Kaepernick as anything other than just another of you basic, everyday “Cafe-Communists.”  He’s like a 20 year old college student railing against the evils of capitalism while driving around in a $100,000 BMW that his parents bought him courtesy of all the fruits of, wait for it…CAPITALISM.  In Kaepernick’s case, NFL fans are the unfortunate parents of this disturbingly ungrateful child.  NFL fans made Colin Kaepernick a multimillionaire; and yet, he proceeds to spit in the face of his benefactors?  He bites the hand that feeds him?  It’s way past time free enterprise rejected this defective product.  And you know, what I really find as being a bit ironic is the fact that as quarterback he makes a much better tackling dummy.  Because he really does suck.

And one last note, remember when the Dallas Cowboys wanted to wear a small patch on their helmets to honor slain Dallas Police Officers, and the NFL nixed it?  It was just a week or so later that Kaepernick started with his childish nonsense. The NFL has showed whose side they are on.  And while I used to watch quite a bit of football when I was younger, I really don’t watch much anymore.  The only game I watched all of last season was the Super bowl and that was only because of Manning.  The game has been changed to the point where it doesn’t really interest me anymore, and there are no longer any players like there were in the old days.  Guys like Bradshaw, Butkus, Page, Montana, Harris or Tarkenton to name just a few.  Now you have way too many punks like this jerk-off Kaepernick.