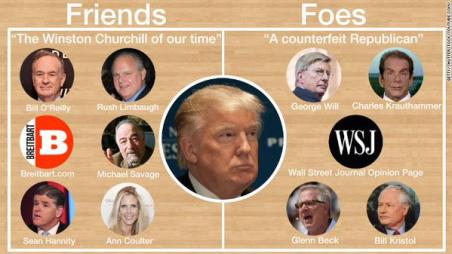 Is it just me or do I seem to recall that it wasn’t all that long ago, politically speaking, when we were hearing many on the right taking a certain amount of joy in accusing many on the left of being afflicted with what they referred as a psychological disorder they called Bush Derangement Syndrome.  This affliction was described as follows: the acute onset of paranoia in otherwise normal people in reaction to the policies, the presidency — nay — the very existence of George W. Bush.   And apparently it’s contagious since these days I would argue that it’s now many on the right who have come down with what sounds like a very similar type of psychological disorder.

And it’s this new disorder that could, at least as far as I’m concerned, very easily be identified as, Trump Derangement Syndrome.  Symptoms of this latest condition seem to include, but are not be limited to: the coming completely unhinged over Donald Trump as well as those who support him, and seem to cause anti-Trump journalists, as well as those pundits and political strategists who reside on the Right, to exhibit some of the most rank and disgustingly juvenile reactions.  It’s really quite amazing and should call into question how it is that these individuals should be viewed as conservatives when acting so much like liberals.

Now it’s one thing for some liberal rag like the Washington Post to run pictures of Trump grimacing under the headline, “Trump Runs for the Spite House,” etc., but the intensity, and the absolute crudity, coming from of those who are the supposed voices of brand-name conservatism is nowhere to be exceeded.  And frankly I find it as being nothing short of appalling that those whom I once viewed as being serious journalists may in fact more closely resemble the intellectual lightweights that reside on the left.  Let’s just call them ‘CINO’ Conservatives.  Because like RINOs, most of these ‘journalists’ are simply ‘Conservative In Name Only’.

Cindy Simpson, writing in the ‘American Thinker’, collected a recent sample of the visceral, and even pornographically-themed, hostility toward Trump and his supporters which has now erupted amid the punditry on the Right.  While I’m assuming there’s an attempt by some to be witty, what generally comes out is the equivalent of graffiti. Simpson sees the trend as off-putting not only to Trump supporters but also to those seeking a “Big Tent”.  After reading through Simpson’s collection one finds that disgusting examples abound. After all, who in their right mind would want to get inside a shrinking tent with these smut-talking men?

And so, welcome to the metaphorical gutter of anti-Trump/supporter debate and journalism, where “vomit” and “rape-lovers” also pass as terms of political repartee (Commentary editor John Podhoretz). Seriously?  And then there was this headline of an essay by David Harsanyi at The Federalist: “Trump’s Immigration Plan Is Hardcore Porn for Nativists”.  I can only assume that many on our side have now taken up with hanging out with those more skilled practitioners of ‘journalistic malpractice who typically operate within the confines of the liberal gutter.  This is not the kind of language that we have come to expect from those supposedly on our side.

I’m thinking that far too many on our side are losing, or may have already lost, sight of the real objective here.  And that is, of course, to prevent Hitlery, or any other Democrat, from winning the keys to the White House.  And I can only come to the conclusion that those now busying themselves by going after Trump and his supporters would be much more comfortable if it were someone the likes of a Jeb Bush or perhaps a Christie, both sure losers in a general election, were to win the nomination.  Ya know, I’ve always thought that those on the right were a bit more adult in their behavior than those on the left.  But apparently I was wrong.  Dead wrong!